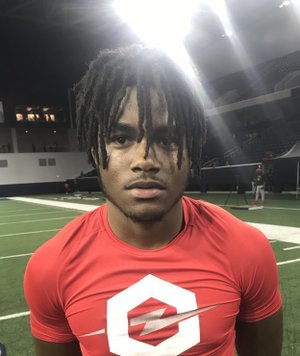 FRISCO, Texas — Cornerback Lorando Johnson announced a top three of Arkansas, LSU and Texas A&M on Dec. 27, but that doesn’t appear to be the case now.

Asked if those were still his top three, Johnson gave a lukewarm response.

“Yes, but no," he said. "In recruiting they’ll come before all the other schools.”

Johnson (6-0, 185 pounds) of Lancaster, Texas, has added offers from Alabama, Michigan, Ohio State, Texas Tech and Arizona since Dec. 27 to go along with offers from Arkansas, Texas, LSU, Auburn, Ole Miss, Nebraska, TCU and others.

He plans to visit Arkansas later this month. He said the Razorbacks' affiliation with the Southeastern Conference and Arkansas' 2019 recruiting class have him interested in the program.

Johnson was one of the standouts at the Dallas The Opening Regional on Sunday by displaying outstanding speed, quickness and the excellent ball skills.

“He’s a cool coach,” Johnson said. “He relates with the kids. Everything we do, he’s able to relate.”

ESPN rates Johnson a four-star prospect, No. 11 cornerback and No. 113 overall prospect in the nation. LSU assistants Bill Busch and Corey Raymond head up the Tigers’ recruitment of Johnson.

“They keep it real,” Johnson said. “They’re not going to sugar coat (anything).”

He plans to visit LSU this spring. The Tigers’ recent history with defensive backs is attractive to Johnson.

“They have the top three DBs in the league right now,” Johnson said. “They must be doing something right.”