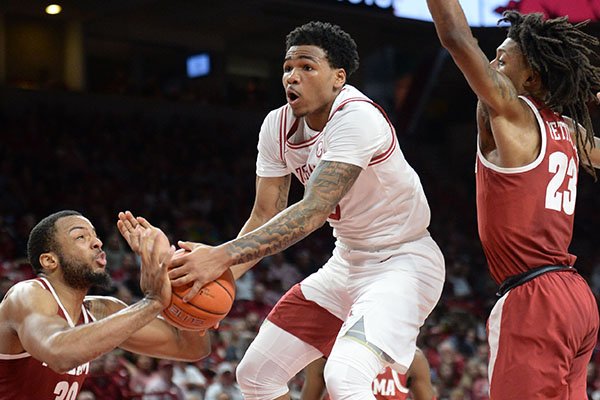 Arkansas guard Desi Sills drives to the basket during a game against Alabama on Saturday, March 9, 2019, in Fayetteville.

FAYETTEVILLE -- When University of Arkansas Coach Mike Anderson decided to put Desi Sills into the starting lineup, the freshman guard from Jonesboro showed he was up to the challenge.

"My reaction was I've got to step up for my team," Sills said. "Coach has given me the opportunity to be a starter, and I'm running with it."

"I've been putting the work in before practice, and even on the off days," Sills said of his hot shooting. "Just trying to get up shots and help my teammates out."

Sills scored a career-high 15 points against Kentucky at Rupp Arena in his first road start. The Wildcats won 70-66, but the Razorbacks built on their strong performance and have won their past three games.

"I think Desi's energy is contagious," Anderson said. "He's knocking shots down. He's making plays, getting to the basket. He's got a good game -- and I think his confidence has really soared.

"He's a competitor. I want our guys competing for playing time, and he's competing for it. He's helping our basketball team defensively, offensively, and I think he brings an edge that you've got to have. Especially in that guard position."

"He gives you 110 percent, maybe even more," Gafford said. "We feed off of him, and it goes through the whole team."

Sills said his success on offense as a starter hasn't changed his mentality about being a stopper on defense.

"Defense leads to offense," Sills said. "So I'm maintaining that and doing what I can on the offensive end to help us score when it's needed."

Texas Tech Coach Chris Beard -- who led the University of Arkansas at Little Rock to a 30-6 record and the 2016 Sun Belt regular-season and tournament championships before beating Purdue in the NCAA Tournament -- was voted the District VII coach of the year.

The Red Raiders are ranked No. 7 in The Associated Press poll and are 26-5, including a 67-64 victory at home over Arkansas. They were picked to finish seventh in the Big 12 in a preseason poll, but shared the conference championship with Kansas State at 14-4.

Arkansas guard Isaiah Joe leads the SEC in three-point baskets per game at 3.42 and with a 42.9 shooting percentage from beyond the arc.

If Joe finishes the season still first in both categories, he'll be the second SEC freshman to do that along with Tennessee's Chris Lofton 14 years ago.

Joe has hit an Arkansas record 106 three-pointers in 247 attempts. He's hit the second-most three-pointers ever by an SEC freshman behind the record 113 by Kentucky's Jamal Murray during the 2015-16 season.

Arkansas will meet Florida in the SEC Tournament for the seventh time when the teams play Thursday's opener at noon at Bridgestone Arena in Nashville, Tenn.

The Gators hold a 4-2 edge against the Razorbacks in the SEC Tournament, but Arkansas won last season's matchup in St. Louis 80-72 to stop an eight-game losing streak to Florida.

Florida was the No. 8 seed and Arkansas No. 9 when the Gators beat the Razorbacks 68-61 in the 2016 SEC Tournament in Nashville.

The Razorbacks won the teams' first SEC Tournament matchup 75-74 in Atlanta in 1999 before the Gators won the next four, including a 77-56 victory in the 2007 championship game in Atlanta. The Gators went on to win the their second consecutive national championship.

WHEN Noon Central on Thursday