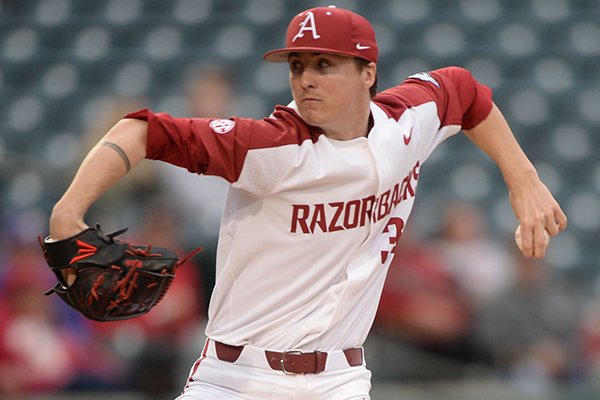 Arkansas pitcher Patrick Wicklander throws during a game against Western Illinois on Tuesday, March 12, 2019, in Fayetteville.

The freshman left-hander threw his second consecutive five-inning gem to lead No. 10 Arkansas to a combined one-hitter in an 8-0 victory over Western Illinois on Tuesday at Baum-Walker Stadium.

Wicklander (2-0) struck out eight batters and allowed just one hit on an infield single, the same stat line he produced in last Wednesday's 9-2 victory over North Carolina-Charlotte.

The Razorbacks (13-2) posted back-to-back shutouts for the first time since a doubleheader sweep over South Carolina on April 14.

Arkansas notched 11 hits and scored in five consecutive innings, and its pitchers combined for 14 strikeouts.

"That was a great job by our pitching staff," Arkansas Coach Dave Van Horn said. "Wicklander got us off to a great start. He pounded the zone, threw a lot of strikes, a lot of fastballs, and started throwing some change-ups in about the third, which was nice to see."

The Leathernecks (4-9) advanced one runner to third base against Wicklander, who walked one. The lone hit came on Drue Galassi's infield single in the fifth on which second baseman Trevor Ezell charged toward the mound to field it, but his running throw was wide of first base.

"I was throwing everything, getting ahead with my fastball and pitching backward later in the game," Wicklander said. "I was mixing everything up today.

Sophomores Casey Martin and Heston Kjerstad hit home runs to spark the Arkansas offense. Kjerstad went 4 for 4 with a triple and two-run home run, and he was a double shy of the cycle while raising his batting average to .348.

"It felt good to help the team out and put some runs on the board for us," Kjerstad said.

His triple and home run were driven the opposite way toward center and left field.

"It's just hitting the ball where it's pitched, and you keep rolling with it," Kjerstad said.

"That's what he did last year when he kind of got hot," Van Horn said of Kjerstad's opposite-field prowess. "Now it's just back to his same old self. He could hardly hit a ball harder than that ball over the center fielder's head into the wind."

Martin went 2 for 4 with 2 runs scored, and he hit his team-high fourth home run and added a double.

Kole Ramage, Jacob Kostyshock, Kevin Kopps and Matt Cronin worked one inning each. They combined for six strikeouts in the four innings of hitless relief.

Arkansas seized the lead in the first inning. With one out, Kjerstad drove a pitch from Alex Dorethy to the wall in almost dead center field over the head of Galassi to leg out a triple. Ezell hit a grounder to second base to bring in the run.

That score stood until the fourth. Kjerstad was hit by a pitch to lead off the inning, then Ezell ripped a single back through the pitcher's circle. Dominic Fletcher walked to load the bases with no outs.

Dorethy (0-3) struck out designated hitter Trey Harris, but he was pulled after walking Casey Opitz to force in a run. Jordan McFarland lifted a fly ball to deep left field to score Ezell on a sacrifice fly to make it 3-0. Dorethy, who entered with a 9.28 ERA, gave up 3 runs on 3 hits and 2 walks in 3⅓ innings.

Martin's home run capped an eight-pitch at-bat with one out in the fifth. He fouled off a pair of pitches in the battle with Javin Drake before pulling a towering shot just inside the left-field foul pole for a 4-0 Arkansas lead.

Opitz was hit by a pitch with one out in the sixth, then came home after McFarland singled him to third and Jacob Nesbit pushed a bunt single up the first-base line.

Kjerstad's opposite-field home run over the left-field wall came behind Martin's leadoff double to increase the Hogs' lead to 7-0.

Curtis Washington hit a pinch-hit single in the eighth, advanced on Martin's walk and Kjerstad's single, and made it 8-0 on Jack Kenley's sacrifice fly.

Ezell, playing his first game at second base, was tested in the second inning with a couple of tough plays. He made the first, a backhand stop and a throw across his body from near second base, to retire Dorethy.

He didn't make the second when he had to charge toward the mound to glove Nolan Ard's ground ball and could not make the transfer to his hand for an error. Ard stole second base and advanced when Opitz threw the ball into center field.

The Leathernecks had three runners after that -- Galassi's infield single in the fifth, and walks drawn by Ard and Dillon Sears.

SHORT HOPS Heston Kjerstad’s first inning triple was the first of his career and the sixth this season for the Razorbacks. … Arkansas pitchers struck out 10-plus batters for the 10th time, and for the eighth time in the past nine games. … The umpiring crew overturned a safe call on a Jordan McFarland slide into home plate in the sixth inning, taking a sacrifice fly RBI away from Christian Franklin. … Arkansas designated hitters Trey Harris and Matt Goodheart, batting in the fifth slot, went 0 for 4 with 3 strikeouts.