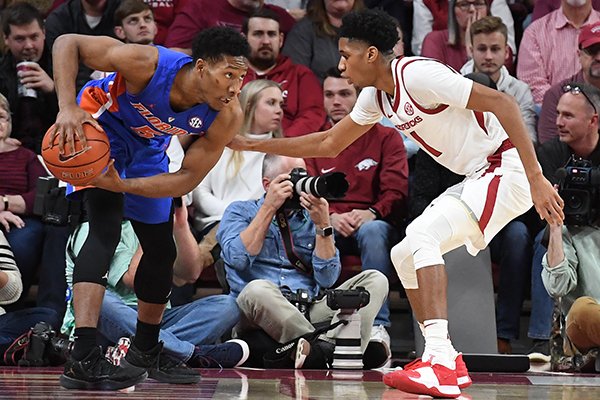 NASHVILLE, Tenn. -- Florida guard KeVaughn Allen is in a major slump going into the Gators' SEC Tournament opener against the University of Arkansas basketball team today in Bridgestone Arena.

Allen, a senior from North Little Rock, is averaging a team-high 11.9 points on the season, but just 4.5 in the past four games.

Florida guard KeVaughn Allen, a senior from North Little Rock, has significantly better offensive stats in seven games against Arkansas than his 130 games against other opponents:

In Florida's victory at Vanderbilt -- which went 0-18 in SEC games -- and losses at home to Georgia and LSU and at Kentucky, Allen shot a combined 16.1 percent from the field (5 of 31), including 3 of 17 on three-pointers.

"It's very concerning," Gators Coach Mike White said. "I wish I had the right answers. I wish I was able to help KeVaughn play at the level we all know he's capable of playing at more consistently.

"Obviously, if he's playing better as of late, we'd be playing better. But that goes for everyone on our team. We certainly would like to see KeVaughn finish his career strong."

Playing Arkansas might be what Allen needs to break out of his slump.

Allen led Florida with 18 points in its 57-51 victory at Arkansas this season after going scoreless in the second half and taking just one shot in the previous game when the Gators lost at home to South Carolina 71-69.

Although Allen shot 3 of 11 -- including 1 of 9 on three-pointers -- when the Gators won at Arkansas on Jan. 9, he regained his aggressiveness on offense and hit 11 of 12 free throws. He was 4 of 4 from the free-throw line in the final 12 seconds after the Razorbacks had closed to within 53-51.

Allen also clinched Florida's 87-83 victory over Arkansas at home as a freshman in 2016 when he hit two free throws with 5.6 seconds left.

Career numbers show that playing Arkansas brings out the best in Allen, who has helped the Gators go 6-1 against the Razorbacks.

Allen is averaging 15.9 points in seven games against Arkansas, and 12.0 in his 130 games against other opponents. That's a 25 percent increase in scoring when Allen has faced the Razorbacks.

"We're going to get his best shot, and this is his senior year," Arkansas Coach Mike Anderson said. "Of course, I'm sure he wants to go out with a bang. So we've got to do all that we can to hopefully hold him in check a little bit.

"But I think when you play your home state, obviously there's a sense of pride. I think that kicks in and it brings on the different kind of intensity."

"I think that it's just natural for guys to be potentially a little more revved up playing a program that they're really, really familiar with," White said. "This one is a neutral site game, but hopefully playing your home state school in the bottom of the ninth of your senior year will wake him up a bit."