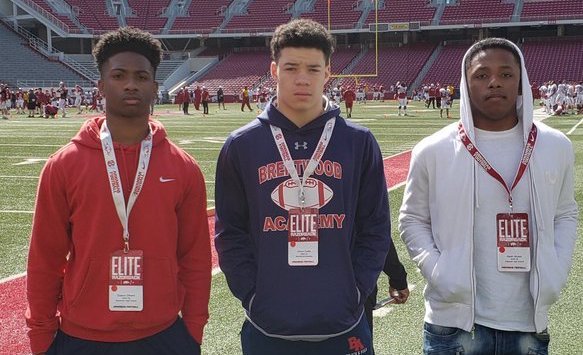 Arkansas head coach Chad Morris and his staff has certainly made a recruiting push into Tennessee since their arrival on campus, and it appears that is continuing for the 2020 class.

One of those Tennessee prospects Arkansas is involved with is Brentwood (Tenn.) Academy linebacker Devyn Curtis (6-2, 215), who recently took an unofficial visit to check out the Razorbacks.

Arkansas signed Murfreesboro Blackman wide receiver Trey Knox and the Memphis duo of defensive end Eric Gregory and wide receiver Shamar Nash, all three of whom arrived in Fayetteville as early enrollees in January as part of its 2019 class.

French and Eason have offers from Arkansas and a multitude of other SEC schools while Ole Miss has offered McDonald and the Razorbacks have shown interest.

“With getting guys like Trey Knox and seeing a lot of Tennessee people in there,” Curtis said of helping Arkansas with him. "It's nice to know they are recruiting Tennessee.”

Curtis, who has offers from South Carolina, Vanderbilt, Missouri, Nebraska, Kentucky, Memphis and Austin Peay so far, has been able to see a lot of programs in the past year, but puts Arkansas up near the top.

“I have visited South Carolina, Vanderbilt, Kentucky, Clemson, Virginia Tech, Purdue, Georgia Tech and I feel like there's a few others I might be missing,” Curtis said. “It's one of the tops. I haven't seen them all yet. It's up near the top.”

Curtis, who had 99 tackles, including 10 sacks and 16.5 stops for lost yardage as a junior, helped lead Brentwood Academy to a 12-2 mark this season and the Division II Class AAA state title, it’s fourth straight crown.

He had a team-leading 11 tackles in Brentwood’s 28-6 win over Memphis University in the championship game. The Razorbacks, who are recruiting numerous 2020 prospects in the state, have not offered Curtis as of now.

“If they offered, it would bring me back up here again for sure,” Curtis said. “I really, really liked it. They said I'm really high on their board and they can't wait to see me later this spring.”