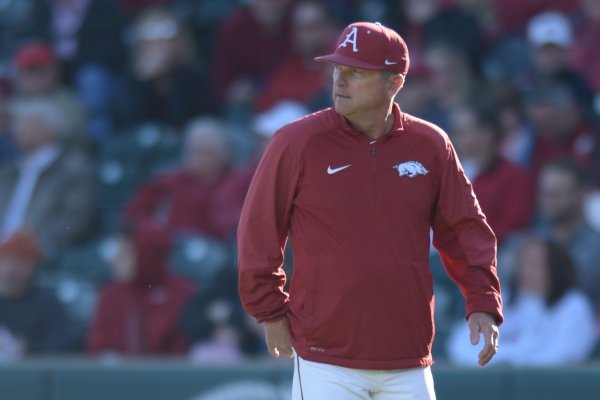 Arkansas Texas Wednesday, March 14, 2018, during the inning at Baum Stadium in Fayetteville. Visit nwadg.com/photos to see more photographs from the game.

AUSTIN, Texas -- As far as midweek baseball series go, it would be hard to picture a more intense scenario than what will go down at the University of Texas' Disch-Falk Stadium the next two days.

The No. 9 Arkansas Razorbacks (17-2) and the No. 15 Texas Longhorns (15-7), both riding hot streaks, will play a pair of highly anticipated games, starting tonight at 6:30 in the warmest climate Arkansas has seen this season.

The Razorbacks (17-2) have ridden sizzling pitching to six consecutive victories, including an SEC-opening sweep of Missouri over the weekend. The Longhorns (15-7) opened Big 12 play with a series victory over No. 11 Texas Tech in Austin.

The former Southwest Conference rivals met three times last year, and the Razorbacks won them all, making emphatic statements in the process.

A fired-up Matt Cronin flashed a horns down signal in front of the Arkansas home fans after closing out a 7-5 victory over Texas on March 14, 2018.

Heston Kjerstad legally steamrolled Longhorns first baseman Jake McKenzie as the Razorbacks mounted a comeback for an 11-5 victory in the College World Series opener for both teams on June 17.

Arkansas Coach Dave Van Horn said he doesn't get overly worked up to play the Longhorns, despite playing in the old SWC rivalry for the Hogs.

"I get more pumped up about playing teams in our league," Van Horn said. "To me, it's like playing Oklahoma State or Oklahoma. ... They're just good programs, good teams, big-name schools."

His players feel a little differently.

"I grew up a Texas Tech fan, my parents went there and everything," Nesbit said. "So whenever we would play Texas, we would have a big watch party because we were never really fond of UT."

Texas shortstop Masen Hibbeler, the reigning Big 12 Player of the Week, recalled the intensity of last year's games in Fayetteville, won 13-4 and 7-5 by the Razorbacks.

Hamilton and Petrinsky are still on the roster, but Hamilton suffered a ruptured Achilles tendon in January and is out for the year, while Petrinsky was lost for the season with a torn labrum in his throwing shoulder on March 6.

Arkansas freshman Patrick Wicklander (2-1, 2.45) ERA will make his fourth midweek start. The left-hander had eight strikeouts and allowed one hit in each of his last starts against North Carolina-Charlotte and Western Illinois. He'll be opposed by Texas right-hander Jack Neely (0-0, 6.23).

Both teams are coming off dominant pitching performances and light hitting in conference-opening series victories.

The Longhorns took two of three from No. 11 Texas Tech in Austin and won 4-3 on Sunday after being no-hit for the first five innings and being shut out on Saturday.

"Ugly wins are a lot better than pretty losses," Texas Coach David Pierce said Sunday. "This just shows the resiliency from this team. We had nothing going in our favor. We couldn't throw strikes, we were getting no-hit through five and we just found a way to win the game.

"That's a tribute to our team and our program right now. They're not going to be denied. You have to beat them."

The Razorbacks swept Missouri, with its three tough starting lefties, and won 3-2 Sunday after being no-hit for the first five innings.

"Going into the season everyone thought our strength was offense," Pierce said. "You take David Hamilton and DJ Petrinsky, two of our better hitters out of there and you put young people in there ... you're going to suffer a little bit. They're doing it for the first time."

Texas has a poor fielding percentage of .962, but the Longhorns had no errors in their series victory over the Red Raiders.