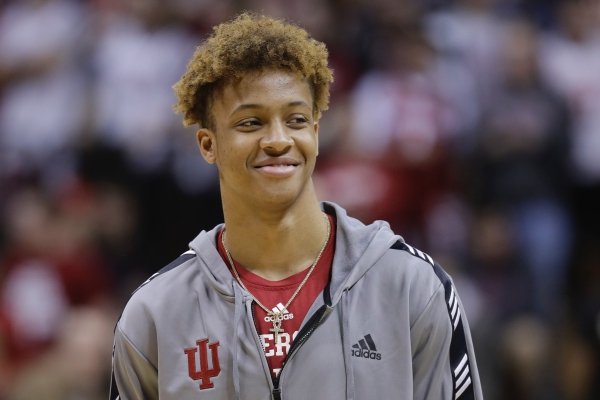 For much of the last week, Indiana freshman guard Romeo Langford has been in the training room.

Maybe he’ll be on the Assembly Hall court Saturday against the University of Arkansas basketball team.

While the Razorbacks know they’ll be without their leading scorer in the NIT with sophomore forward Daniel Gafford declaring for the NBA Draft, the Hoosiers aren’t sure whether Langford will be available for their second-round matchup against Arkansas.

Langford, like Gafford, has been projected as a first-round NBA Draft pick.

But Indiana Coach Archie Miller said Langford missed the Hoosiers’ 89-72 victory Saint Francis (Pa.) on Tuesday night with a back injury, not because he’s chosen not to play in the NIT.

Miller said Langford, who is averaging a team-high 16.5 points and started the first 32 games before the NIT, injured his back on March 14 when Ohio State beat Indiana 79-75 in the Big Ten Tournament.

Langford played 37 minutes against Ohio State and had 9 points, 6 rebounds and 5 assists.

“If we played in the NCAA Tournament [Tuesday] night, he wouldn’t have played. So I think that’s one thing to state.”

Miller said Langford wants to come back and play in the NIT.

“There are short turnarounds right here with these games,” Miller said. “So I don’t necessarily know if one day is going to make a lot of difference for him. Maybe it takes us into that second week.

“But hopefully he starts to feel a little better, he can start to move. He hasn’t done anything since Ohio State on the court, but definitely in talking to Romeo he wants to be out there and play.

“He’s very uncomfortable with the alignment, or whatever is going on with him which popped, sort of spasmed out on him during the Ohio State game.”

Arkansas Coach Mike Anderson said the Razorbacks are preparing with the expectation Langford will play.

“Very talented kid,” Anderson said. “He can go off the dribble, shoot the three-point shot. He’s so long. He gets in that lane and he can make plays.

“Very athletic kid. He’s one of those smooth players.”

And if Langford is able to play on Saturday?

“It just makes them more potent,” Anderson said. “He played well here. He shot the ball, got to the lane, shot free throws. He’s a tough match-up.”

Junior guard Devonte Green, who led Indiana with 26 points off the bench against Ohio State in the Big Ten Tournament, started in Langford’s place against Saint Francis and had 12 points, 6 assists and 5 rebounds.

While Indiana beat Saint Francis without Langford, Arkansas won 84-72 at Providence on Tuesday night without Gafford, who averaged team-highs of 16.9 points. 8.7 rebounds and 2.0 blocked shots. Against Indiana, he had 27 points, 12 rebounds, 3 blocked shots and 2 steals.

Anderson was asked if the Razorbacks can play with the same sense of urgency — and motivation to show they can win without Gafford — against Indiana as they did in the Providence game.

“I’m anxious to see,” Anderson said. “I believe these guys have got a workman-like attitude. I’m hoping that’s going to continue to be a carryover.

“Sometimes you do wonder about that, but I really believe these guys will go out and and continue to play for each other.”

The Razorbacks also can wonder if they’ll be playing against Langford on Saturday.