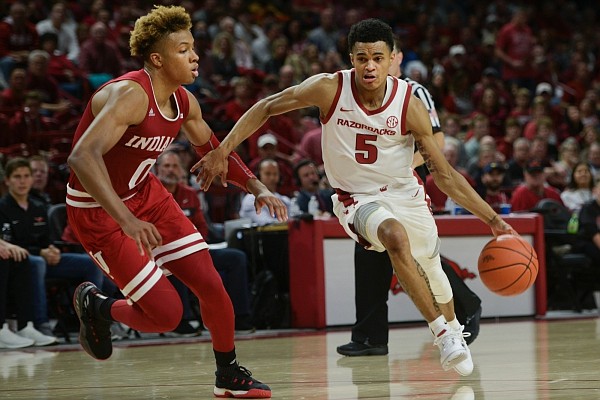 Can you sum up the kind of year Indiana has had to this point?

JS: It’s been a rollercoaster for the Hoosiers. They began the year 12-2 with high hopes and little doubt they’d make the NCAA Tournament. Early wins over Butler, Louisville, and Marquette reinforced those beliefs. Then January and February happened. Indiana lost 12 of 13 games over a stretch where all but two of its opponents were in the KenPom top 50. The Hoosiers looked dead in the water.

They followed that stretch by winning four straight games, with only a win needed in the Big Ten Tournament to lock up an NCAA Tournament. Of course, they lost that game to Ohio State after falling behind by 20, then cutting the lead to two with little time left. That game was essentially a microcosm of their season. Too little, too late.

What is the latest on Romeo Langford's status?

JS: Langford is still questionable to play with a back injury. He suffered the injury at some point within the first eight minutes of Indiana’s loss to Ohio State in the Big Ten Tournament last week. The three-day break between games should help him recover, but there hasn’t been a status update since the Hoosiers defeated St. Francis (PA) Tuesday night.

Everyone at Indiana is adamant that he’ll play once he’s healthy.

What is the Indiana perspective of Arkansas right now without Daniel Gafford?

JS: Arkansas looks like a team that is invigorated by Gafford’s absence. The win over Providence certainly caught me off guard. With that being said, it’s also a severely undersized team without Gafford and a group that Indiana should be able to take advantage of. If Langford plays, there isn’t anything to deter him from attacking the rim at will.

Even without Langford, senior forward Juwan Morgan and junior center De’Ron Davis should be able to attack the post. Arkansas is definitely a more interesting and modern team without Gafford, but that lack of interior presence defensively could be a major issue in this one.

Who do you envision being something of an x-factor for Indiana in the game?

JS: Junior guard Devonte Green is the easy answer here. Green, the younger brother of current Toronto Raptor Danny Green, takes over the Indiana offense when Langford isn’t on the floor. He’s a good creator in the pick and roll and is even more effective when his shot is on and he’s hitting from deep.

The problem is, he forces the issue when he’s off and can make some very poor decisions in simple situations. If Green is on his game, Indiana is much better, if he’s off, he’s almost unplayable.

Which team wins and why?

JS: Even if Langford is out, Davis and Morgan should score efficiently in the post, opening the game on the perimeter. Then, it’ll come down to who can make shots from deep. Indiana has struggled there all year, but has shown flashes of a team that can shoot. If they get hot? Indiana wins by double figures. If they can’t hit anything? Arkansas could pull away.

I’ll take the middle ground and go with Indiana by five or less.

Bonus: For Arkansas fans traveling to Bloomington, any recommendations around town?

JS: BuffaLouie’s. It’s a sports bar with great burgers and wings, and a pretty ideal place to watch the NCAA Tournament after the game is over.