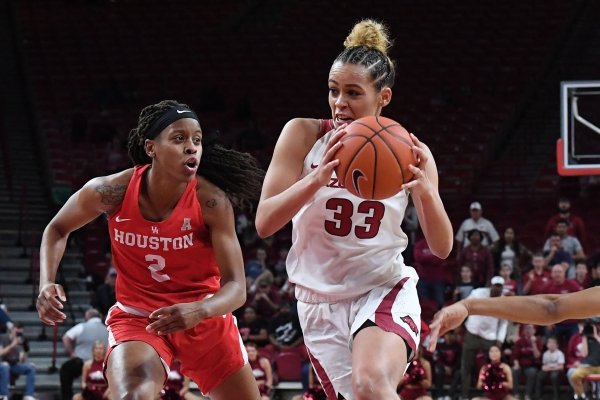 Arkansas' Chelsea Dungee drives to the basket between Houston's Octavia Barnes (LEFT) and Angela Harris Thursday March 21, 2019 at Bud Walton Arena in Fayetteville during the first round of the Women's National Invitational Tournament. Arkansas won 88-80 in overtime. The Razorbacks take on University of Alabama at Birmingham at home on Sunday.

The Razorbacks beat the Cougars 88-80 in overtime on Thursday night in Walton Arena before an announced crowd of 3,021 in a first-round WNIT game.

Arkansas (21-14) advanced to play a second-round game at 2 p.m. Sunday in Walton Arena against Alabama-Birmingham, which beat Troy 93-89 on Thursday night.

The Razorbacks were able to pull away in overtime after Chelsea Dungee hit two free throws to tie the game 73-73 with 19.2 seconds left in the fourth quarter and then they got a defensive stop.

"To know that we had a second chance to go out there and give it our all, it really upped our spirits."

Dungee, a sophomore guard who led the Razorbacks with 37 points, had a three-point play to give Arkansas a 78-73 lead with 3:44 left in overtime. Her driving basket pushed the Razorbacks' lead to 81-75 with 42.3 seconds left.

"I'm just proud of us," Dungee said. "We stuck together and pulled out the win."

Monk made a steal and converted a three-point play with 33.7 seconds left to make it 84-75.

"That team is fast," Houston Coach Ronald Hughey said. "My hat's [off] to Mike and what he's doing here.

"He has the kids believing. He's gotten them to fall into the roles they're in right now for their team to be successful."

Dungee hit 15 of 17 free throws -- making and taking more than the Cougars.

"I think you have to play in attack mode and over time I think it got them in foul trouble, it got them passive."

Hughey said he lobbied the officials unsuccessfully to call more fouls on the Razorbacks, who had 17 compared to 28 for the Cougars.

"We didn't expect the free throw discrepancy to be where it was," Hughey said. "We thought it would be a little closer. But it was a huge difference-maker."

Hughey said the strategy was to drive the ball on the final possession of regulation with the game tied, but Arkansas switched from a man-to-man defense and the Cougars settled for a three-point attempt by Dorian Branch, who missed with three seconds left.

The Razorbacks got the rebound to send the game into overtime.

"We got a wide-open look from one of the best three-point shooters in our conference," Hughey said.

The game had 13 ties and nine lead changes, but Arkansas never trailed in overtime after Williams' rebound basket put the Razorbacks ahead 75-73.

"The crowd got into it and we got into it," Dungee said. "You just take that and embrace it and build on it.

"I felt like our team was under control and we had it the entire overtime."

KEY STAT The Razorbacks made 28 of 34 free throws.

UP NEXT Arkansas plays Alabama-Birmingham at 2 p.m. Sunday at Walton Arena in Fayetteville.