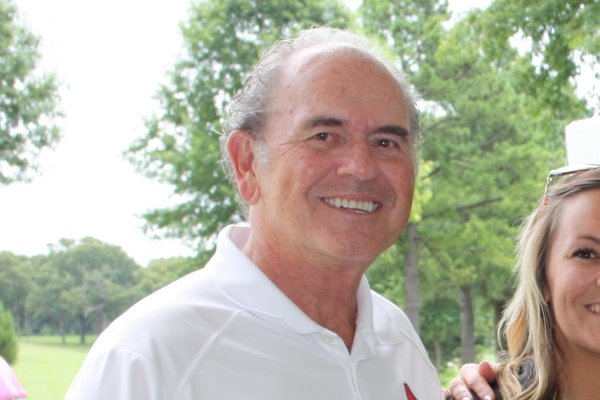 Bill Bradley and Gary Adams were both picked by the Philadelphia Eagles in the 1969 NFL Draft, but 245 spots apart.

The Eagles took Bradley -- the former Texas quarterback who moved to safety as a senior -- in the third round with the No. 69 pick.

Gary Adams at a glance

NOTEWORTHY Three-time All-Southwest Conference first-team cornerback from 1966-1968 … Selected for Arkansas’ all-decade team of the 1960s … Inducted into the UA Sports Hall of Honor in 2011 … Picked in 12th round of 1969 NFL Draft by the Eagles and played one season in Philadelphia … Had two punt returns for touchdowns in 1968, including a 79-yarder against Baylor … Team captain in 1968 when the Razorbacks finished 10-1 and beat Georgia 16-2 in the Sugar Bowl … Also ran track at Arkansas … Played football, basketball and baseball and ran track at Piggott High School … As a basketball player, scored 40 points in a game against Corning.

Adams, a cornerback at the University of Arkansas, had to wait until the 12th round and the No. 314 pick to hear his named called.

But when the rookies showed up to training camp, Adams had bragging rights over Bradley.

"I had a lot of fun kidding Bill about those interceptions he threw to me," Adams said. "He was good-natured about it. He never took anything too serious."

When both were sophomores in 1966, Adams intercepted Bradley twice in the fourth quarter -- first in the end zone and then when Texas had the ball at the Arkansas 12 -- to preserve a 12-7 victory for the Razorbacks.

"That game kind of put me on the map," Adams said. "It gave me a lot of confidence."

Adams finished the season with seven interceptions -- which led the Southwest Conference and is still tied for second with Louis Campbell for the most by a Razorback behind Jim Rinehart's 10 in 1949 -- and earned his first of three consecutive All-SWC first-team honors.

"I give Loyd Phillips as much credit for my success as anybody, because he loved to rush those quarterbacks," Adams said of the Razorbacks' 1966 Outland Trophy winner as the nation's top interior lineman. "They didn't want to get tackled by Loyd, so they'd throw the ball up and I got to catch a lot of those passes."

Adams is joining Phillips and several of his other Razorbacks teammates by being inducted into the Arkansas Sports Hall of Fame this year.

"It's quite an honor and it's very special," said Adams, 71. "I had wondered over the years if I would ever get in.

"Then the older I got, I thought, 'If I do get in, I hope it happens before I die.' I'm glad I'm still alive and get to enjoy this with my family."

After leading Piggott High School to 23 consecutive victories from 1963-65 as the Mohawks' starting quarterback, Adams was excited to accept a scholarship offer from Arkansas. But Adams, 5-10 and about 165 pounds at the time, wasn't sure he had the build to play for the Razorbacks.

"The biggest concern was my size," Adams said. "Was I big enough?

"I decided I'd go to Arkansas, and if I couldn't make it there then I could always go to Harding. That's where my three sisters went, and that's where my mom wanted me to go."

Harding never had a chance after Johnny Majors -- who coached Arkansas' defensive backs from 1964-67 -- convinced Adams to move from quarterback to cornerback his sophomore season.

"Coach Majors said, 'We're kind of thin over here. I think you've got a good chance to play,' " Adams said. "It turned out to be a great move for me."

Majors, who became a head coach at Iowa State, Pittsburgh and Tennessee, said Adams is among the best college cornerbacks he's ever seen.

"Gary was an outstanding athlete and had great speed," Majors said. "He had great concentration and quick eyes and was very smart and alert."

Playing defense wasn't new to Adams. He played cornerback as well as quarterback at Piggott and had five interceptions in one game against Marked Tree.

"You never had to tell Gary anything twice," Majors said. "He corrected any mistake -- and he didn't make many -- right away.

"There's nothing but good about Gary in every way. He was never a problem. He always came ready to practice and ready to play.

"I don't think he was a braggart, but he certainly had excellent confidence. He hustled all the time. You never caught him loafing or jogging. He was always headed towards that football wherever it was."

Terry Stewart started at free safety for Arkansas in 1967-68 and was Adams' roommate for road games. In 1969 he replaced Adams as the starting left cornerback.

"I don't remember Gary ever getting beat deep," Stewart said. "He was a very good cover man and had great instincts. He was really quick and fast-breaking on the ball.

"He also was a great teammate and a really fun guy to play ball with."

In addition to starring as a cornerback, Adams averaged 10.3 yards as a punt returner in 1967-68. As a senior he had a 79-yard return for a touchdown against Baylor and credited Stewart with making the first and last blocks.

"The blocks probably aren't as good as they sound, but they worked," Stewart said. "Gary did a lot of weaving and dancing down the field to give me time to get there at the end."

Along with playing with an Outland Trophy winner in Phillips, Adams also was coached by one.

Bud Brooks, who won the Outland Trophy at Arkansas in 1954, was Adams' coach in the seventh and eighth grade at Piggott.

"We had no idea who he was at the time," Adams said. "We just knew he was very mean and tough."

After helping Arkansas to a 10-1 record in 1968 capped by a 16-2 victory over Georgia in the Sugar Bowl, Adams played one season in the NFL.

A collision with Miami Dolphins fullback Larry Csonka during a preseason game in 1969 helped convince Adams it might be time to consider another career.

"He broke through the line and he just ran flat over me and knocked me out. I got a concussion out of the deal. When that happened, I started thinking about life after football."

Adams is in his 49th year working at International Computer Systems in Little Rock and is the company's executive vice president.

When Csonka spoke at the Little Rock Touchdown Club last fall, Adams got a chance for a more pleasant meeting with the Pro Football Hall of Famer.

"Larry told me he didn't remember me," Adams said. "I told him, 'I certainly remember you.' "

Adams said he has no plans to retire.

"As long as the body and the mind allow me, I'm going to continue to work," he said.

Most days Adams wakes up at 4 a.m. and goes to the gym to work out for an hour. He also does yoga once a week.

"I believe you've got to keep the body and the mind active," he said. "Working out helps me do that."

Adams said he usually is in bed by 10 p.m. with his early schedule, but might be up past then Friday for the Arkansas Sports Hall of Fame induction banquet.

"I think it's a very fitting and very deserving honor for Gary," Majors said. "I'm very proud of him and happy for him. He's certainly earned it."