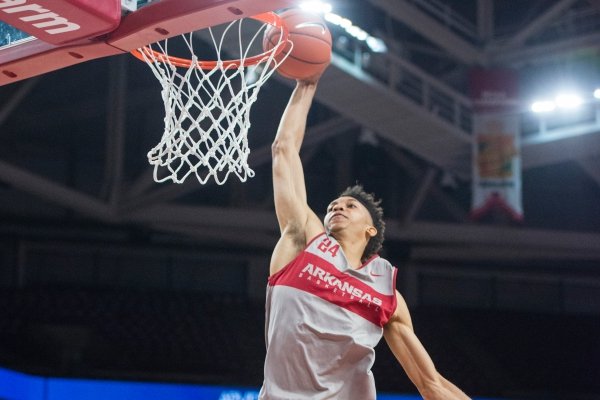 Ethan Henderson takes his turn in a slam dunk contest Friday, Oct. 19, 2018, before the Arkansas Red and White scrimmage at Bud Walton Arena in Fayetteville.

With 6-11 sophomore Daniel Gafford, a first-team All-SEC pick, declaring for the NBA Draft on Monday and leaving the team, the Razorbacks needed help inside and turned to Henderson against the Friars.

Going into the NIT opener, Henderson had played a total of 28 minutes in 10 games with 5 points and 6 rebounds.

At Providence, Henderson looked as if he had been in the rotation all season. He had 6 points and 5 rebounds in 18 minutes off the bench.

"Dan moved on, so it was an opportunity for [Henderson] to step into some of those minutes," Arkansas Coach Mike Anderson said. "I thought he did a good job of stepping up."

Anderson said before the game that Henderson has been inconsistent in practice, but gradually improved from the competition he's faced from teammates.

"I alluded to it earlier that he had bits and pieces of it in practices, you could see him really coming on," Anderson said. "I think over the course of the year going against these guys day in and day out, you've got to get better.

"So, the opportunity presented itself and he took advantage of it."

Anderson figures to keep Henderson in the rotation for today's game against Indiana.

"Defensively, he rebounded the basketball," Anderson said of Henderson's play at Providence. "He was in the right place at the right time, he ran the floor.

"So all things we've been encouraging him to do, I thought he did. And the other guys out there, I think they helped him when he was out there in possessions.

"You put him out there with the understanding that he will go out there and help your team perform, and I thought he did."

Among the rules changes being used in NIT games is having the three-point line moved from the NCAA's 20 feet, 9 inches to the International distance of 22-13/4.

When the Razorbacks opened the NIT at Providence, they made it look as if the line had been moved in rather than being extended.

"It was one of those nights where we just made shots," Razorbacks Coach Mike Anderson said. "We've got some guys that probably shoot from that range anyway when you think about Isaiah and Mason and Desi.

"I thought we shared the ball, too. If you look at some of those shots, the passing was really crisp and the lane was open, so guys had spot-open shots and they knocked them down."

Joe has hit an Arkansas record 110 three-pointers this season and is three shy of the SEC freshman mark of 113 set by Kentucky's Jamal Murray during the 2015-16 season. Jones has hit 75 three-pointers. Sills is 14 of 22 on three-pointers in the last seven games since being put in in the starting lineup."

"They can really, really shoot the ball," Indiana Coach Archie Miller said. "I think that's the thing that in watching them play against Providence was really evident in that game -- how fast they played, how well they shot the ball.

"The three-point line is something that's very scary."

Arkansas is the only SEC team left in the NIT after Alabama, a No. 1 seed, was upset at home by No. 8 seed Norfolk State 80-79 on Wednesday night.

The Razorbacks, a No. 5 seed, led from start to finish on the road against No. 4 seed Providence.

"A lot of teams, when you come off the conference tournament, you're obviously emotional after a loss, and it can stay with you a little bit," Arkansas Coach Mike Anderson said. "But if you chose to play in a tournament, then you need to go out and play and give it everything you've got. You're playing for a championship."

Anderson was a junior point guard for Tulsa when the Golden Hurricane won the 1981 NIT championship.

"So I know the value of winning championships," Anderson said. "What it does is set the mindset up for hopefully something even bigger.

"But you've got to show with energy, I know that. And I thought our energy was good [at Providence].

"We're such a young basketball team that any opportunity to go out and play and try to get better I think will help this team not only right now, but in the future as well."

Indiana had 18 turnovers against Arkansas when the Razorbacks beat the Hoosiers 73-72 at Walton Arena earlier this season.

"But definitely when they put it on, you have to be very organized, and I think the thing that they do is they put the ball in other guys' hands with the doubling and getting rid of it and moving it that other guys have to make decisions other than maybe your main ball-handlers.

"You have to try and be very, very detailed, very, very smart. Once you break the press, you've got to be able to be organized, because charges, turnovers and quick shots is what they want."