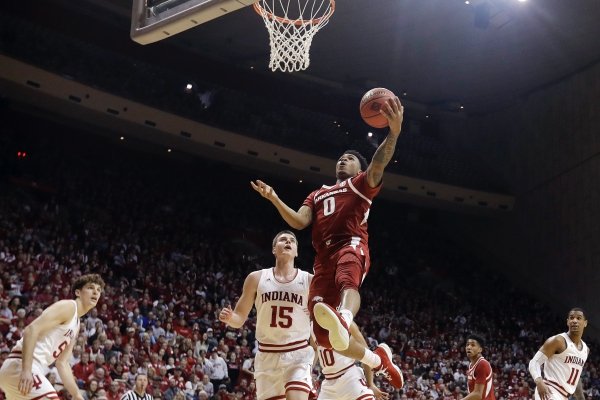 Arkansas's Desi Sills (0) puts up a shot against Indiana's Zach McRoberts (15) during the first half in the second round of the NIT college basketball tournament, Saturday, March 23, 2019, in Bloomington, Ind. (AP Photo/Darron Cummings)

Arkansas' basketball season is over, and now attention turns to the future of the program.

The Razorbacks gave Indiana all it wanted in Assembly Hall on Saturday, but, as has happened more often than they'd like this season, were done in by dry spells on the offensive end. Arkansas did not make a shot from the floor over the final 6:58 of the game, and Indiana hung on to win 63-60 in the second round of the NIT.

"I was proud of the effort. I thought our guys gave maximum effort, and we keep talking about the sum of all the parts," Arkansas coach Mike Anderson said in his postgame radio interview. "We just had some things go down the stretch that we normally ... you've got to make free throws and we had a couple of shots right there at the basket.

"If we could have had that then it puts a lot of pressure on Indiana."

Arkansas missed eight of its final nine shots in the loss, and Adrio Bailey and Jalen Harris took and missed four of the last five. Harris, who entered Saturday's game an 11.9 percent 3-point shooter, launched a 30-footer at the buzzer. Bailey finished with eight points and had an overall-solid game, but misfired on a jumper and a layup at the rim in the final 1:19 of the game.

Then, Gabe Osabuohien, coming off perhaps his best game of the season at Providence, made 1-of-4 free throws with less than 1:20 to play. Anderson was proud of the team's overall effort, but was disappointed in the team's inability to cash in at the line late and finish at the rim.

"You come into an environment at this time of the year ... our guys were never intimidated," he said. "You've got to be able to make some plays and, again, we had a couple layups going down the stretch. You make those, it's a one-point game or maybe an and-1.

"The game, I thought at times, was at Indiana's pace, but we just came up a little short and ran out of time."

Desi Sills and Isaiah Joe were the only Razorbacks who ever really got into a rhythm offensively at one point or another. Sills scored a career-high 18 points on 4-of-6 from 3-point range but did not play over the final four-plus minutes after fouling out. Saturday marked the fourth time in his eight starts that he reached double figures in scoring.

Sills averaged 10.6 points and shot 7-of-11 from 3-point range in Arkansas' three postseason games. Heading into the offseason and into 2019-20, he's going to be a big focal point, especially with how he finished his freshman season.

Joe finished 3-of-9 from 3-point range, making him 7-of-26 this postseason, but he did close the season tied with former Kentucky star Jamal Murray for the SEC single-season freshman record for 3s made with 113. He shot 41.4 percent from distance this season.

It was clear from the jump what Indiana coach Archie Miller's gameplan was: attack the Razorbacks inside. Juwan Morgan, who entered Saturday averaging 18.4 points and 8.4 rebounds in the last five games, finished with 15 points and seven rebounds, and De'Ron Davis (6-10, 255) added 10 points.

Morgan and Davis, though, weren't Arkansas' biggest issue. It was Devonte Green, who got the starting nod in place of Hoosiers star freshman guard Romeo Langford. Green, standing at 6-3, scored scored a game-high 19 points and grabbed a career-best 11 rebounds in the win.

Green hit 4-of-9 from 3-point range and improved to 15-of-27 from deep in postseason play.

Anderson said following the game he likes what he has with this team at the moment and sounded optimistic for the days ahead. The next step is adding some key pieces in the coming weeks, he said.

"I think we've got a chance to have a great offseason, get prepared and get ready to take it up another notch," Anderson added.