Arkansas' vets muscle up to take road series at Alabama 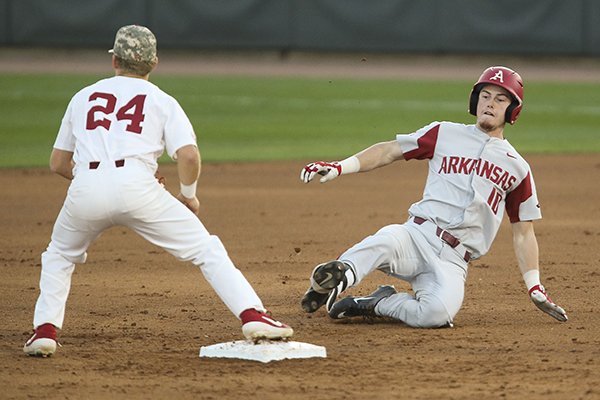 TUSCALOOSA, Ala. — A day after getting its first true spanking of the season, Arkansas responded in a big way Sunday to win its first conference road series in nearly two years.

Casey Martin led off the game with a home run, Dominic Fletcher added his second blast of the weekend, and Fletcher and Heston Kjertstad had three of their team’s 14 hits as the No. 9 Razorbacks downed Alabama 10-2 to take a series-clinching victory before 3,687 fans at Sewell-Thomas Stadium.

Arkansas starting pitcher Cody Scroggins went five innings to the get the win for Arkansas (20-4, 5-1 SEC). The Razorbacks teams had traded blowout wins with Alabama (19-6, 2-4) in the first two games of the series and did not win any road SEC series last season.

Arkansas' last SEC series win on the road came in the 2017 regular-season finale at Texas A&M. The Razorbacks and Aggies are tied for the SEC Western Division lead coming out of the weekend.

“It was good to win an SEC series on the road,” Arkansas coach Dave Van Horn said. “We didn’t do well with that last year and it came down to a lot of Sundays with it being 1-1 against a lot of ranked teams. We just didn’t have very good success.

“I just really liked the way we bounced back after getting it handed to us yesterday by Alabama. Today we came out and swung the bats extremely well.”

Van Horn wanted to make sure his team did not overreact to Saturday's 10-0 loss to the Crimson Tide.

“Yesterday I told them that it was just one of those games that you have to learn from and give credit to Alabama because they played really well,” Van Horn said. “They pitched well, they out-hit us, they did everything better than we did and just took it to us.

“But you can’t start thinking that we are not very good because it’s baseball and it’s what happens. Tomorrow is what it is all about, try to find a way to win a series on the road and move on.

“Like I said we didn’t play our best game, but as far as everybody being into it, the intensity in the dugout, I could just tell win or lose that we were here to play as as a coach all I say is to show up and play hard every day and we played well.”

Fletcher, who now has four homers on the season after launching one in Arkansas’ 12-3 win on Friday night and another that capped the scoring in the eighth Sunday, was thrilled with the road win.

“I think it was our first road win since my freshman year and it is big to beat any SEC team on the road,” Fletcher said. “It all comes down to Sundays most of the time so it was good to start off the year right.

“Yesterday we kind of came out and their guy had good stuff obviously and they punched us in the mouth. They scored a couple of runs early and it was kind of over from there.

“But we did save a little bit of bullpen for today, which was really big. We kind of did the same thing for them today, we kind of punched them in the mouth and got after it.”

Martin, who raised batting average to .243 with a pair of hits, jumped on Crimson Tide starter Will Freeman’s second pitch of the game with a no-doubt blast that got the Razorbacks off and running.

“His first at-bat he shows bunt on the first pitch and he had been swinging at the first pitch and we talked about that before the game,” Van Horn said. “We told him show bunt, but don’t bunt it - ball or strike or whatever - just try to stay through the middle. I don’t know what pitch he hit, but I knew it was gone.”

Martin, a preseason All-American who hit a team-leading .345 with 87 hits, 14 doubles, 13 home runs and 49 RBI as a freshman, has struggled some in the leadoff position this year.

He manufactured a run in the eighth when he beat out an infield hit, stole second and then raced all the way home to score when catcher Brett Auerbach’s throw bounced into the outfield.

“We told him when you mishit the ball we would like for it to be on the ground because we feel like you have about a 50-50 shot of beating it out,” Martin said. “He stole second and there are not too many guys in baseball who can do what he did.”

Arkansas pushed its lead to 4-0 in the third against reliever Kyle Cameron, one of seven Crimson Tide pitchers in the game.

Kjerstad led off the inning with a single and raced to third on Ezell’s double. They scored on Fletcher’s groundout and Casey Opitz’s sacrifice bunt.

Alabama got on the board in the fourth by scoring two runs via a pair of Arkansas errors and a wild pitch.

Arkansas immediately responded by putting up four more runs in the fifth.

Kjerstad was drilled by a pitch and Ezell doubled. Then Fletcher, Opitz and Matt Goodheart followed with RBI hits, and Jack Kenley added a sacrifice fly for an 8-2 edge.

“Cody came out and got us going and they tried to climb back into with those two runs and cut it in half, but it was big for our offense to come in and score a run,” Van Horn said. “We told them we needed to score a run and we ended up scoring four and felt a little bit better about the game.

“We didn’t play great in the field and we made some mistakes, but our pitchers threw enough strikes and we made enough plays, but really the offense was the story of the day."

The first four batters in the Arkansas lineup - Martin, Kjerstad, Ezell and Fletcher - were 10-for-15 in the game with 9 runs and 5 RBI.

Goodheart, the sixth-hole hitter, was one of five Razorbacks with multiple hits.

“It was good to see the older guys bust out a little bit because we beat Missouri last weekend, but really not a lot from the returnees so to speak,” Van Horn said. “This weekend they got a lot of innings going, drove in runs, hit home runs, it was really good to see.”

Jacob Kostyshock took over in the sixth and went 1 2/3 innings before Kevin Kopps and closer Matt Cronin finished the game.

“Kostyshock almost got us through two full and Kopps got us four outs,” Van Horn said. “Cronin is obviously our closer and we had a big lead, but obviously he had not pitched since last Saturday.

“A lot of times a closer’s mentality is they are not into it and they don’t want to come in with a big lead and have a bad outing, but he was, ‘I want the ball,’ and he threw the ball good and that was good to see.”

Van Horn was happy with his team’s 4-1 road trip that included splitting two games at Texas.

The Razorbacks will return to Fayetteville via plane Sunday night, have Monday off, play at Missouri State on Tuesday night and host Ole Miss next weekend.

“We have been on the road for six days,” Van Horn said. “Tomorrow is an off day and we will go up and play Missouri State and then we are actually going to give them another day off on Wednesday, have a light practice on Thursday and get ready for Ole Miss.”

Van Horn is not certain yet who he will pitch in Tuesday’s game.

“It might be a little bit of everybody so we will figure out how we want to handle everybody and the rotation,” he said.