PHOTOS: Arkansas women roll over UAB to advance in WNIT 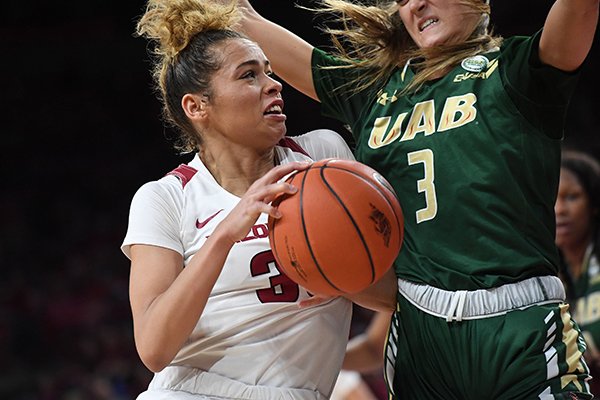 The Blazers limited Dungee to just three first-half points, but her teammates made them pay, hitting nine 3-pointers and building a 30-point halftime lead en route to a 100-52 rout in Bud Walton Arena in front of a raucous crowd of 3,939.

Arkansas (22-14) did it with balance, placing five players in double figures led by Alexis Tolefree with 17 points, including five 3-pointers. The Razorbacks also tied a school record with 15 3-pointers.

Norton said Dungee’s teammates just rose to the occasion when his team was focusing on Dungee.

“We tried to take her out of the game, but when you do that you’re kind of gambling,” Norton said. “You’re hoping the other kids don’t step up and knock down shots. We knew were a little outmatched coming here. So you roll the dice a little bit.

“You’re hoping some of these other kids miss some shots, but they got on a roll. We just got outplayed. They had a great atmosphere. Their fans were behind them. It was just one of those days. We ran into a buzz saw.”

Dungee finished with 13 points despite the slow start, but it was still far below her 28-point average over her last six games. But she had plenty of help. Besides Tolefree, Malica Monk added 15, while Jailyn Mason and Bailey Zimmerman chipped in 11 points each.

The Razorbacks dominated a team that finished second in Conference USA and took Tennessee into overtime earlier in the season before losing. Arkansas applied the knockout punch early, finishing the first quarter on a 21-4 run after UAB took a brief 6-5 lead.

A’Tyanna Gaulden’s jumper the first-quarter buzzer gave Arkansas a 26-10 lead and the Razorbacks never looked back.

It even surprised Arkansas coach Mike Neighbors with Dungee being limited.

“I can tell you this, I’m done putting limits on this group,” Neighbors said. “Because they amaze me every time. I said in Greenville (during the SEC Tournament) I don’t think we can play any better and we’ve done it back-to-back games.”

The Razorbacks got off to a blistering start, shooting 57 percent from the floor (9 of 16) with Tolefree and Mason combining to go 7-of-9 from beyond the arc. But they also limited UAB to just 27 percent shooting (9-of-33) in that first two quarters.

• Katelynn Thomas, a 6-foot junior, was UAB’s only player in double figures, finishing with a game-high 20 points on 9-of-13 shooting from the floor.

• The Blazers, who averaged nine made 3-pointers per game throughout the season, went 0-for-12 from 3-point range through the first three quarters before making three in the final seven minutes of the game.

• Grace Spangler’s 3-pointer with 43 seconds left in the fourth quarter pushed Arkansas to the 100-point mark.