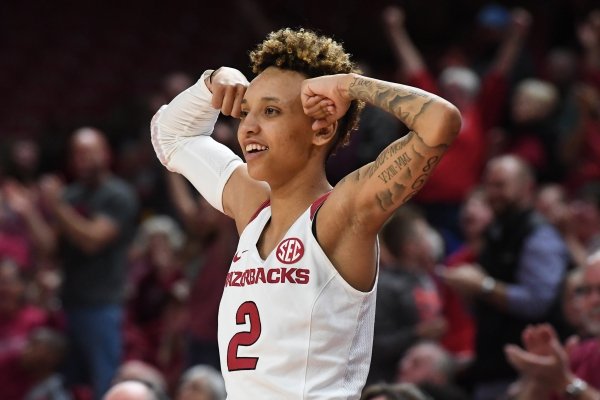 Image from Arkansas' 88-80 win over Houston Thursday March 21, 2019 at Bud Walton Arena in Fayetteville during the first round of the Women's National Invitational Tournament.

FAYETTEVILLE -- The University of Arkansas women's basketball team came away with a hard-fought 88-80 overtime victory in the first round of the Women's National Invitation Tournament on Thursday, and it won't get any easier in the second round, Coach Mike Neighbors said.

CHALK TALK Tickets are all general admission and prices are $5 for adults and $3 for students. … The first 300 kids (12 and under) will get in free. … This is only the second meeting between the two teams. UAB defeated Arkansas 82-48 in 1981. … Arkansas guard Chelsea Dungee set the school’s single-season scoring record on Thursday night against Houston, surpassing Shelly Wallace’s record of 692 points set in the 1988-89 season. She now has 724 points. … Dungee also holds the single-season records for free throws made (219) and free throws attempted (263).

"This is a 26-win team we're getting ready to face, so they're used to winning," Neighbors said. "They don't get fouled as much as we do, but shoot more threes. I just think we'll have to play as well as we've played all year long to beat these guys."

The Blazers advanced with a 93-89 victory at Troy on Thursday. The Arkansas-UAB winner will play TCU, a 71-54 winner over Texas-Arlington on Saturday, in the third round of the WNIT. The day, time and location will be determined following today's game.

Even though Arkansas likes to play at a pretty fast pace, that should be no problem for UAB after facing Troy's race-horse style, Neighbors said.

"Our pace is gonna feel like a day off compared to what they just did," Neighbors said.

Sophomore guard Chelsea Dungee poured in a game-high 37 points, including eight in overtime to help the Razorbacks turn back the Cougars. She also hit two free throws with 19.2 seconds left in regulation to tie the game at 73-73.

Dungee has a specific knack for drawing fouls as she's made the second most free throws (219) of any Division I player in the country. Only two other players have shot more free throws.

"It's about her giving the defense disinformation," Neighbors said. "She's like a magician. This off-hand over here, she's getting you to look at it and she's going the other way.

"Now that she's in the shape she's in, her first step is deceptively quick."

Dungee gave Houston defenders fits, too, as she made 15 of 17 free throws. She shot and made more free throws than Houston's entire team (11 of 15).

Neighbors also praised the work of junior Kiara Williams. The 6-1 post player was again at a size disadvantage against Houston, but she enjoyed an all-around night with 15 points on 7-of-7 shooting from the floor to go with a team-high 8 rebounds and 5 blocked shots.

UAB, which finished second in Conference USA, has balanced scoring with four players averaging between 11.2 and 14 points per game. The Blazers are led by junior Rachael Childress, who has made 110 three-pointers. By comparison, Alexis Tolefree leads Arkansas with 71 three-pointers made but in two more games.

Neighbors said his team may have been still been trying to shake off the disappointment of just missing out on an NCAA tournament bid.

"No, I think there was a little sting still," Neighbors said. "I didn't try to talk our kids off that. I want them to be mad about it and remember that when we're lifting weights this summer. I want them to remind those freshmen when get on campus how bad Monday sucked.

"That was a hard day. You say, 'Ahh, forget it.' You can't. I want them to remember it and sear it in their minds and express it to those freshmen. We don't want to leave any doubt when it comes to this time next year."

But he reiterated the Razorbacks are excited about playing in the WNIT.

"This group is really proud to be playing in the NIT," Neighbors said. "Not all teams do that. Our kids have really embraced it."