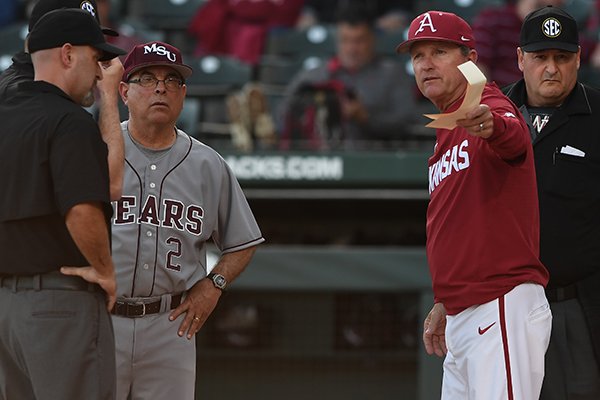 TELEVISION The game will televised by ESPN-Plus and can be accessed on the ESPN app and ESPN3.com. (Subscription required)

WEATHER According to the National Weather Service, Tuesday will be mostly sunny with a high near 55 degrees in Springfield. Nighttime conditions will be mostly clear with a low of 36 degrees.

NOTABLE Tuesday’s game is the final in a six-game road swing for Arkansas that began last Tuesday with a game at Texas. The Razorbacks are 3-2 during the road trip….Missouri State has lost five consecutive games to Oklahoma and Cal-Santa Barbara. The Bears will be playing their first home game since March 1 and are coming off an 11-game road trip in five different cities….Tuesday’s game will be Arkansas’ first in Springfield since the Razorbacks hired former Missouri State hitting coach and recruiting coordinator Nate Thompson to the same position following the 2017 season….Arkansas and Missouri State have played every season but one since 1998. The teams played 11 times between 2015-18, including six times in the NCAA postseason….Arkansas third baseman Jacob Nesbit was named SEC Freshman of the Week on Monday after going 8-for-19 with 7 RBI during games at Texas and Alabama last week. Nesbit enters the Missouri State game with a 14-game hit streak and a 21-game on-base streak….Missouri State lost veteran pitchers Ty Buckner (Achilles) and Tyler McAlister (labrum) to season-ending injuries in the preseason. Buckner was expected to be the Bears’ No. 1 weekend starter, while McAlister was expected to compete for a midweek starting job….Missouri State’s 7.33 team ERA ranks 275th out of 297 teams, nationally. The Bears’ .206 batting average ranks 291st.