By: Joey Chandler Special to the Democrat-Gazette
Published: Monday, March 25, 2019 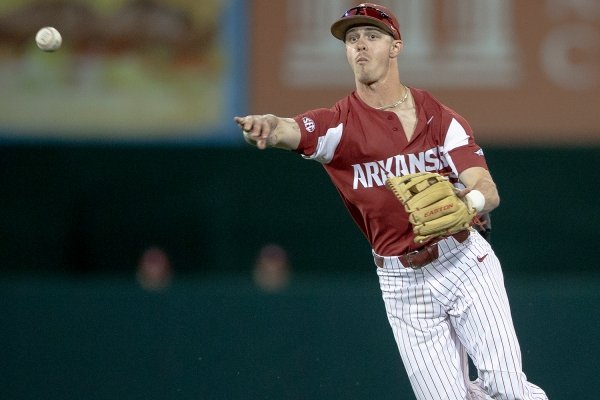 TUSCALOOSA, Ala -- A strong offensive performance led the University of Arkansas to a 10-2 victory over Alabama to take two out of three in the SEC series Sunday afternoon at Sewell-Thomas Stadium.

The No. 9 Razorbacks (20-4, 5-1 SEC) scattered 14 hits and five players finished with two or more hits en route to victory, bouncing back from Saturday's 10-0 shutout.

NO. 9 ARKANSAS AT MISSOURI STATE

SHORT HOPS Casey Martin recorded his fifth home run of the season with a shot to left field on the second pitch of the game. Dominic Fletcher hit his fourth home run to right center field in the eighth inning. … In the all-time series against Alabama since 1960, the Crimson Tide leads 47-42. In Tuscaloosa, Alabama leads 24-15. In Fayetteville, Arkansas leads 24-18. … Arkansas finished its three-game series against Alabama with a combined 33 hits, including five home runs.

"It's good to win an SEC series on the road. It's been awhile for us. We didn't do well last year and it came down to a lot of Sundays, 1-1, and against some pretty good teams and a lot of ranked teams last year," Arkansas Coach Dave Van Horn said. "I just really like the way we bounced back after kind of getting it handed to us yesterday pretty good by Alabama and today we came out swinging the bats extremely well."

Leadoff hitter Casey Martin sent the second pitch of the game sailing over the left field fence after showing a bunt on the first pitch to give Arkansas a 1-0 lead and set the tone for the afternoon. The Razorbacks built up a 4-0 lead after three innings.

"We didn't play great in the field, we made some mistakes, but our pitchers threw enough strikes and made enough plays. Really the offense was kind of the story of the day for us," Van Horn said.

Alabama (19-6, 2-4) scored both of its runs in the fourth inning off of a sacrifice fly and a wild pitch to cut the lead in half, 4-2. The Razorbacks answered in the top of the fifth, tacking on four runs to take an 8-2 lead. Both Trevor Ezell and Matt Goodheart had RBI doubles to left center field, Dominic Fletcher hit a one-run single and Casey Opitz scored on Jack Kenley's sacrifice fly.

"They tried to climb back in it there with those two runs and cut it in half, and it was big for our offense to come in and score," Van Horn said. "We just told them they needed to score a run and they ended up scoring four and we felt a little better."

Fletcher went 3 for 5 with three RBI, including a home run to right center field in the eighth inning. Heston Kjerstad went 3 for 4 and both Ezell, Martin and Goodheart each had two hits. Drew Williamson finished with two of Alabama's five hits.

Starting pitcher Cody Scroggins (2-0) picked up the victory. He allowed 5 hits and 2 runs in 5 innings, striking out 3 and walking 3. Alabama's Will Freeman (2-2) recorded the loss in two innings, allowing two runs on three hits.

"We didn't play our best game today, but as far as everybody being into it and the intensity in the dugout, I could just tell that win or lose we were here to play," Van Horn said. "As a coach, that is all you want is for guys to show up everyday and play hard and you can live with that. We played well."

Arkansas travels to Missouri State on Tuesday. They resume SEC play at home against Mississippi in a three-game series beginning Friday at 8 p.m.