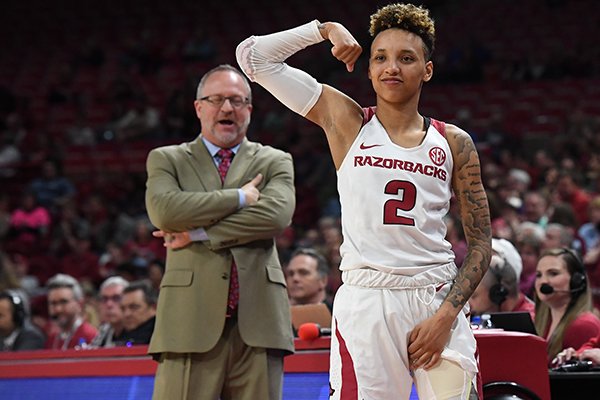 Arkansas guard Alexis Tolefree flexes while coach Mike Neighbors looks on during a second round WNIT game against UAB on Sunday, March, 24, 2019, in Fayetteville.

FAYETTEVILLE -- There's no mistaking the level of excitement surrounding the University of Arkansas women's basketball team these days.

The Razorbacks have won five of their past six games, including a run to the SEC Tournament title game.

The players and Coach Mike Neighbors have talked at length about how much a vocal crowd has played a big part in their two Women's National Invitation Tournament wins. The crowd totaled nearly 4,000 for the Razorbacks' 100-52 whipping of Alabama-Birmingham on Sunday.

The Razorbacks will try to keep it going with their third consecutive home game tonight in the WNIT against TCU in Walton Arena. Tipoff is set for 7 p.m.

Neighbors highlighted the ovation he and his team received Sunday when they took their pregame walk together. And that was 30 minutes prior to game time.

The Razorbacks (22-14) face a team in a similar situation as themselves. TCU (22-10) and Arkansas were both among the "debatable eight," which were the eight teams announced as vying for the final four spots remaining in the tournament 24 hours before the field was unveiled.

"It's great we can get a game like this in Bud Walton," Neighbors said. "They are playing with that similar chip on their shoulder.

The Horned Frogs have the one thing that has given Arkansas fits this season: size. The Horned Frogs feature 6-3 Jordan Moore and 6-2 Amy Okonkwo. Moore was a first-team all-Big 12 selection, averaging a team-high 16.2 points and 8.3 rebounds per game.

"It's always a test for us when their two leading scorers come at those spots," Neighbors said. "I think we're equipped for it. I think we're ready to handle it."

While Neighbors acknowledged TCU's size could be a problem, he also pointed out the Horned Frogs might have a problem matching up with the Razorbacks on the other end. The quickness of Arkansas post players Kiara Williams and Taylah Thomas has given bigger opponents trouble at times.

And that's not mentioning high-scoring guard Chelsea Dungee, who poured in a game-high 37 points in Arkansas' overtime victory over Houston in the opening round of the WNIT.

The resurgence of junior Alexis Tolefree also has been a key to Arkansas' recent run, Neighbors said. The 5-8 guard from Conway finished with a team-high 17 points, including 5 of 6 three-pointers, in the victory over UAB.

"When she's doing what she's doing, you're now throwing your hands up and, 'Well, what do we do now?' " Neighbors said. "She had eight rebounds the other night. Her play is not coincidental to our team play being very good."

The winner faces the Cincinnati-Butler winner in the quarterfinals at a time, date and place to be determined.