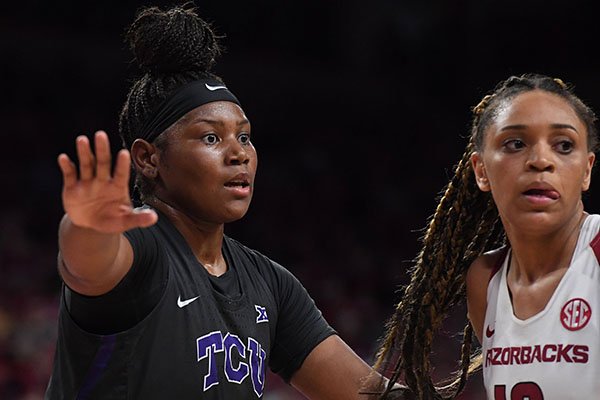 TCU's Amy Okonkwo is guarded by Arkansas' Kiara Williams during a third round WNIT game Thursday, March 28, 2019, in Fayetteville.

FAYETTEVILLE -- Arkansas had overcome size disadvantages at times this season, but TCU's Amy Okonkwo was just too big a hurdle to clear.

The 6-foot-2 senior poured in a game-high 36 points and grabbed 14 rebounds to help the Horned Frogs claim a hard-fought 82-78 victory over Arkansas in the third round of the Women's National Invitation Tournament on Thursday night in front of a frenzied crowd of 4,718 in Walton Arena.

Okonkwo proved to be a handful for the Razorbacks, scoring inside and out and from the free-throw line. She hit a three-pointer with 1:04 left to give TCU a 73-68 advantage, then made 7 of 8 free throws over the final 45 seconds.

Arkansas Coach Mike Neighbors said the Razorbacks were trying to keep Okonkwo from getting the ball late but couldn't do so because of her athleticism.

"She was so clutch," Neighbors said. "She's one of those kids who are match-up problems. Okonkwo was [as] hard to guard as any 6-foot kid we've seen all year long. She's a combination of speed, athleticism, and quickness. We coached against her when she was a freshman at USC and we couldn't guard her then either.

The second-team All-Big 12 selection hit 12 of 13 free throws for the game and also made 4 of 7 three-pointers. She also came up big at key times, scoring 21 of her 36 points in the second half, including 12 in the fourth quarter to help TCU (23-10) rally. The Horned Frogs led for less than five minutes, taking their first lead 61-60 on Lauren Heard's layup with 8:29 left in the fourth quarter.

But Okonkwo also stepped forward when 6-3 Jordan Moore, TCU's leading scorer for the season, got in early foul trouble and finished with seven points, far below her average of 16.2, in only 16 minutes of action.

"I think she played inspired basketball," Pebley said. "She shot the right shots on the perimeter. She played aggressive which set the tone for other players on the team and her teammates got her the ball in really good situations.

"Amy's one of those players who spends as much time in the gym as anybody. It's not a surprise that she's ready to perform in a moment like this."

"I think it wore us down," Neighbors said. "The 16 offensive rebounds and not just that number, but when they were. They were crucial. They were clutch."