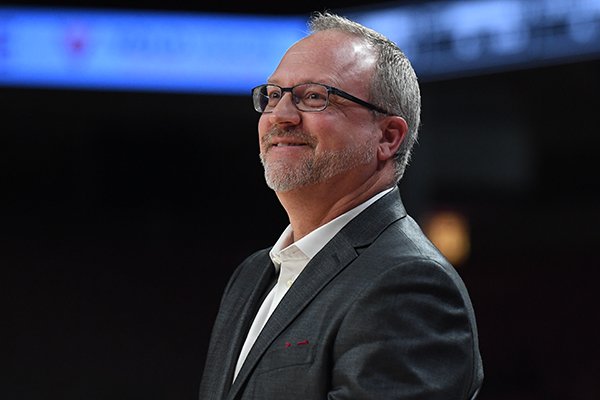 FAYETTEVILLE -- The University of Arkansas women's basketball team doesn't figure to be ranked near the bottom in SEC preseason polls next year.

Arkansas should be picked in the top half of the rugged SEC with four starters and six of its top seven scorers returning from this season's 22-15 team that reached the WNIT quarterfinals. The Razorbacks also are adding junior transfer guard Amber Ramirez -- a McDonald's All-American who redshirted this season after averaging 10.4 points as a sophomore at TCU -- and four high school signees in a class ranked No. 11 nationally by Blue Star Sports.

"We'll take time off, but I won't take much time off," Arkansas Coach Mike Neighbors said after TCU beat the Razorbacks 82-78 on Thursday night in Walton Arena. "My head's already spinning."

Neighbors said he's anticipating how the talented newcomers will mesh with the returnees and the sets they can run together.

"I would anticipate a lot of expectations next year," he said. "We'll embrace them.

"We think we're going to be competitive. So we're putting together an incredibly hard schedule and really challenging ourselves."

Guard Malica Monk, who averaged 12.7 points, was the only senior among Arkansas' starters.

Newcomers along with Ramirez will be forwards Marquesha Davis and Destinee Oberg and guards Makalya Daniels and Ginger Reese.

"Practices are going to be an absolute war, because of the talent," Neighbors said. "I think we'll have a roster than can compete with anybody in the SEC."

Neighbors said the toughest part about the season-ending loss to TCU was having it be the last game at Arkansas for Monk and seniors Bailey Zimmerman, Raven Northcross-Baker and Sydney Stout.

"If we ever win a championship of any kind, I'll be buying those four guys rings," Neighbors said. "All four of them, because we couldn't have jumped all those hurdles we did this season without the individual sacrifices that they all made."

Arkansas upset Georgia, South Carolina and Texas A&M in the SEC Tournament to reach the championship game for the first time -- where the Razorbacks lost to Mississippi State -- and then made a three-game run in the NWIT with victories over Houston and Alabama-Birmingham before losing to TCU.

"I don't think when the year started that playing this late into March was even on anybody's radar," Neighbors said. "There aren't many [Arkansas] teams that have more than 22 wins."

"This group accomplished so, so much," Neighbors said. "And not only the number of wins, but who we did it against. It will go down as one of those years that I remember for a long, long, long time."

"There's no question we captured a lot of new fans," Neighbors said. "We'll work really hard this summer to make sure we keep them."

Neighbors said a combined 6-2 record in the SEC Tournament and WNIT and the excitement generated by Arkansas' postseason success will have big benefits in recruiting.

"I think we'll start to sense that in recruiting this summer," Neighbors said. "We're working really hard in that area. I think we'll find out exactly what it did mean.