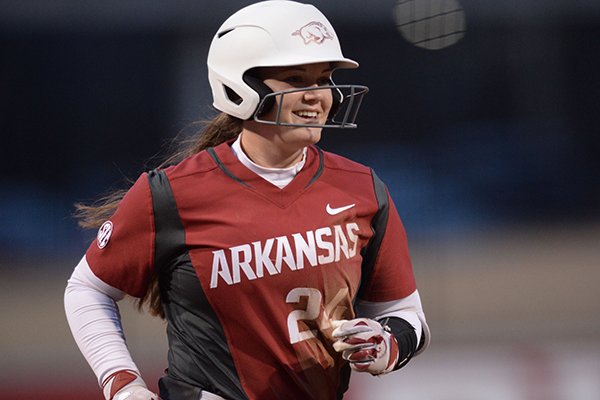 Arkansas second baseman Nicole Duncan smiles as she rounds the bases after hitting a solo home run against Southeast Missouri Thursday, Feb. 21, 2019, during the fourth inning at Bogle Park on the university campus in Fayetteville.

FAYETTEVILLE — Nicole Duncan hit a home run in the fifth inning to give Arkansas a 1-0 victory over No. 23 Auburn on Friday night at Bogle Park.

Duncan’s fourth home run of the season came off Auburn starter Chardonnay Harris (9-4) on a 3-2 count. The Razorbacks won despite leaving eight runners on base and committing three errors.

Autumn Storms (19-6) allowed two hits while striking out seven in a complete-game victory.

Arkansas tied Auburn (35-16, 10-12) and Georgia for eighth in the SEC standings with two regular-season games remaining.

The Razorbacks and Tigers are scheduled to play the second game of their three-game series Saturday at 5 p.m. on ESPNU.