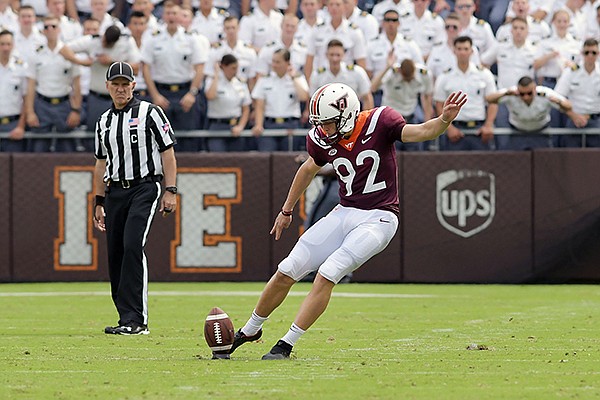 Jordan Stout, who previously kicked at Virginia Tech, has been offered by Arkansas.

FAYETTEVILLE — As soon as he wraps up finals at Virginia Tech, transferring redshirt freshman kicker Jordan Stout will set up visits to Arkansas, Penn State and possibly other schools.

He would be immediately eligible under a new NCAA rule that goes into effect this fall and allows players immediate eligibility if offered a scholarship at a different school.

“The semester ends for me on the 14th and I am planning a visit (to Arkansas), but don’t have a date yet,” Stout said Monday afternoon. "I have a lot of schools contacting me, but these are the two big ones thus far.”

Stout, a Honaker, Va., native who will have three years to play three at his next stop, kicked off 71 times last season for the Hokies with 60 resulting in touchbacks. Only 23 of Arkansas' 59 kickoffs were touchbacks.

The Razorbacks have been dismal in that category the last four years, ranking outside the top 90 nationally each season.

“The coaches seem really excited to get me there,” Stout said of Arkansas. “I can tell they are genuinely interested in me.”

Virginia Tech was one of only four FCS schools to allow fewer than 10 returns last season.

Stout, who missed his lone field goal attempt and made both of his PATs last season, said his prowess on kickoffs is just a matter of sticking to details.

Stout backed up first-team field goal kicker Brian Johnson, who was 12-of-18 last season. Johnson was 1-of-4 on field goal attempts in the Hokies’ spring game while Stout was successful on kicks of 36 and 42 yards in two attempts.

“My decision to leave was mainly because of the success I had on the field, and not getting a scholarship as a result,” Stout said. “I’m so thankful for the opportunity Arkansas has given me to pursue my dream.”

The Razorbacks have a commitment from Texas-San Antonio kicker Jared Sackett (6-2, 180), who would have to sit out the 2019 season then have two years of eligibility.

Arkansas has two scholarships still available in its 2019 recruiting class with the current favorites for those being Stout and Butler County (Kan.) Community College linebacker Juwan Mitchell (6-2, 225), who took an official visit to Fayetteville last weekend.

Mitchell is currently a Minnesota pledge who will visit Texas this weekend and plans to make a decision by the end of May.