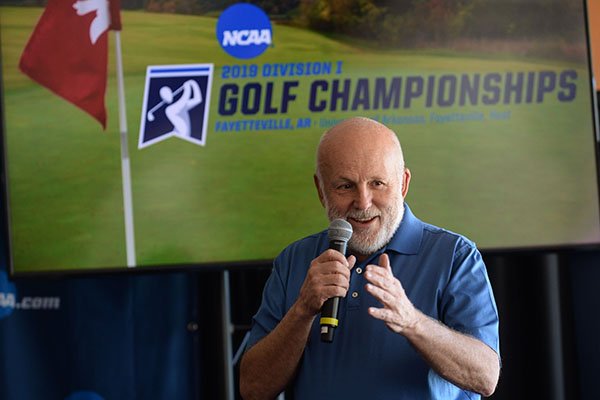 JOHNSON -- The smile on John Tyson's face was as wide as a par-5 fairway.

The Tyson Foods Inc. chairman and founder of The Blessings golf course could barely contain his enthusiasm when asked about hosting the NCAA Division I Golf Championship this week, practically in his own backyard.

The women's tournament will tee off Friday and end next Wednesday, then the men's portion starts May 24 and wraps up May 29. Fans will be able to park and watch the tournament free of charge.

The Blessings golf course opened in 2004 and was originally designed by Robert Trent Jones. It is also the home course for the University of Arkansas golf teams.

"This is a great piece of land," Tyson said during a recent interview at The Blessings' clubhouse. "There is a running joke that Bobby Jones got one hole right, and I screwed up the other 17."

The top collegiate golfers in the country will try their best to tame the course, which underwent a number of design changes since the original layout. In 2014, Kyle Phillips did a redesign to improve routing for a better flow, Tyson said.

"It's much better as far as competitive situations," Tyson said. "It's easier to walk now. It doesn't have as many ups and downs."

Showcasing Northwest Arkansas was the vision Tyson had when the opportunity to host the NCAA golf tournament was first broached. From there, the process moved forward, and The Blessings made a bid to host more than a year ago.

Tyson, 65, said for the past year members at The Blessings have had to make concessions in order for the course to be in pristine condition for the 10 days of tournament play.

"Since January, our members have had to carry a small patch of artificial turf in their golf carts to hit fairway shots off of," he said. "The members have been really supportive of this, but I'm sure they are all ready to get their course back on May 30."

The Blessings is hidden in plain sight between Interstate 49 and Arkansas 112 on the edge of Johnson. Tyson, who has owned the property the course is built on since 1989, wanted to create a golf course away from the buzz of passing cars and congestion of the rapidly growing region.

As a young boy growing up in Springdale, he was introduced to the game of golf at Springdale Country Club. He and his buddies spent their summers playing golf during the day and Little League baseball in the evenings.

"Back then, Springdale Country Club was way out on the edge of town," Tyson recalled. "In those days, there were big gaps ... country gaps, between the cities. Three or four of us would get our bags and go walk and play.

"Those my age will remember a place called Ma Shook's. It was right across the highway from Springdale Country Club, and it was a place you could get some candy and soda pop. So we'd walk over to Ma Shook's and get a drink, then just go play all day."

In the 1960s when Tyson was just learning the game, one of the country's top golfers was frequently on the course in Springdale. R.H. Sikes, who won the men's NCAA individual golf title in 1963, claimed Springdale Country Club as his home course, living just a long tee shot down the road.

"We'd be out there playing and see R.H. and his brothers playing," Tyson said. "We all knew who he was. And you'd see other pros come through from time to time. To us, they were all celebrities."

Tyson's vision of The Blessings was to be a course with some similarities to the course he played as a youth. The location in Johnson, while just minutes from the bustling malls and restaurants in Springdale and Fayetteville, still has a remote feel to it.

"I had the vision in the back of my mind for a long time before we decided to build," he said. "I fly around the country a lot, and I'm always looking out of the window of the plane at the landscape wherever we go, and I'm creating golf courses in my mind. I look at the topography and visualize hole layout. It's something I like to do."

Tyson said playing The Blessings is "like walking through the Arkansas woods, except we're playing golf."

Richard Cromwell, the general manager and chief operating officer at The Blessings, said the teams competing in the NCAA tournament will have the best amenities possible this week.

"All the teams will be staying in Rogers at the same hotel, so that will make travel from there to here a lot easier," he said. "They will all be able to eat breakfast together, which is not always the case for tournaments like this. This will be a nice flow."

In 2014, the course was renovated to make it easier for golfers in tournaments such as the NCAA and various elite junior tournaments to carry their bags and walk the course. The Blessings has hosted a number of top amateur events, and each summer Stacy Lewis, former University of Arkansas golfer and NCAA champion, holds her youth tournament at The Blessings during the week she competes in the NWA Walmart Championship LPGA event in Rogers.

"What an amazing opportunity and advantage to be able to play in front of amazing people at a place we know," Estes said. "It's awesome to be at our place, in our locker room, with our people and the people that support us every day."

The Golf Channel will televise much of the NCAA championships each day, putting Northwest Arkansas in the national spotlight. Showcasing this region was something Tyson was hoping for when they began the bid process to host the event.

"We're excited just to give back to Northwest Arkansas and to watch these young men and women compete," he said. "The way things are now, there are not a lot of championships we can host anymore. Now the big events are more destinations, like Omaha and the College World Series, or softball in Oklahoma City. Golf and track are two events we have the ability to host, so it's always fun to do that and show off Northwest Arkansas.

"A lot of people don't see this part of the state," he said. "It's a pretty special place. I'm excited about it, and I'm excited that we can be a part of it."

NCAA Division I Golf Championships at The Blessings, Johnson

Final four days of both tournaments to be televised on The Golf Channel.