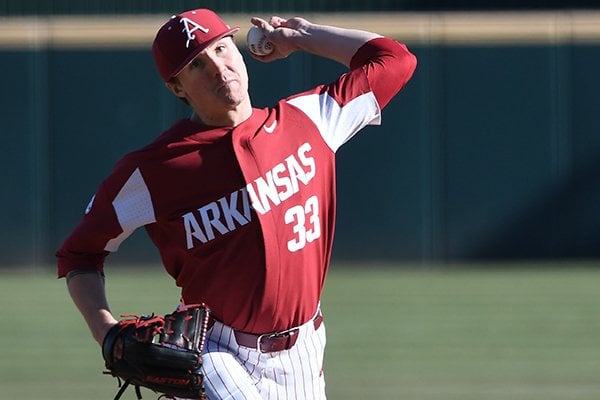 Arkansas pitcher Patrick Wicklander throws during a game against Charlotte on Wednesday, March 6, 2019, in Fayetteville.

Arkansas' dream of a Southeastern Conference championship came to an end Friday night.

The No. 4 Razorbacks lost 6-2 to No. 19 Texas A&M in the second of a three-game series at Blue Bell Park. The teams are scheduled to play the finale Saturday at 11 a.m.

Arkansas needs a win or a Mississippi State on Saturday to clinch at least a share of the SEC West. The Razorbacks fell into a tie with the Bulldogs atop the division Friday after Mississippi State defeated South Carolina.

The Aggies started hot with back-to-back home runs by Braden Shewmake and Bryce Blaum to lead off the first inning, then went ahead 4-0 in the second on a two-run double by Shewmake with two outs.

Shewmake's second hit chased Arkansas starter Patrick Wicklander, who suffered his first loss of the conference season in his shortest start of the year. The Razorbacks lost a game Wicklander started for the first time in SEC play.

Arkansas pulled within 4-2 on Jack Kenley's two-run home run in the fourth inning. It was Kenley's second home run of the series and the team's sixth.

The Razorbacks threatened against Texas A&M starter John Doxakis, but couldn't break through. In a scene similar to last week's series finale against LSU, Arkansas loaded the bases with no outs in the sixth inning against Doxakis after singles by Dominic Fletcher and Heston Kjerstad, an an error that allowed Kenley to reach.

But Christian Franklin and Casey Opitz struck out at the end of long at-bats against Doxakis, and Texas A&M reliever Bryce Miller struck out pinch hitter Jordan McFarland to end the inning without a run.

Arkansas struck out 15 times Friday after striking out 18 times in Thursday's series opener. The Razorbacks were 3-for-15 with runners on base and 0-for-7 with runners in scoring position.

Doxakis pitched 5 2/3 innings and earned his seventh win. The junior left hander struck out eight batters and struggled some with his command, walking only two but taking several other at-bats to three-ball counts.

Miller and Joseph "Moo" Menefee each threw 1 2/3 scoreless innings for the Aggies, who won for the 22nd time at home this year.

Shewmake and Blaum each had two hits to lead Texas A&M. Shewmake had 3 RBI and Blaum had 2 RBI.

Kjerstad had three hits to lead the Razorbacks and Kenley had two hits.

The Razorbacks are 3-1 in third-game rubber matches this season, including 2-1 in SEC play. Arkansas hasn't had a series go to a decisive third game since early April at Auburn.

The Aggies are 5-2-1 in rubber matches, including 4-2-1 in conference series. Texas A&M won a decisive third game last week at Alabama.

Texas A&M will be without its usual Saturday starter in Game 3 as sophomore left hander Asa Lacy serves the final game of his four-game suspension stemming from an ejection last week at Alabama.

Casey Opitz singled, but Jordan McFarland, Trevor Ezell and Casey Martin all struck out swinging at pitches out of the zone from Texas A&M lefty Moo Menefee. The Razorbacks struck out 15 times tonight and have struck out 33 times this weekend.

Arkansas will almost assuredly drop into a tie with Mississippi State atop the SEC West heading into the final day of the regular season. The Razorbacks cannot win the SEC title.

We'll have more soon at WholeHogSports.com.

Marshall Denton retired the Aggies in order in the bottom of the eighth inning.

Arkansas will send Casey Opitz, Jordan McFarland and Trevor Ezell to the plate in the top of the ninth inning against Texas A&M freshman left hander Joseph "Moo" Menefee.

It just hasn't been Arkansas' night, but it hasn't been for a lack of opportunities. Dominic Fletcher singled and Heston Kjerstad singled to start the eighth, but Fletcher was thrown out trying to go first to third. The throw by right fielder Logan Foster was originally called late, but overturned on a replay review.

Jack Kenley and Christian Franklin both struck out to end the inning.

The Razorbacks have the same number of hits as the Aggies, seven apiece. Both teams have stranded eight runners.

The Aggies added a run in the seventh on an RBI double by Logan Foster. Hunter Coleman, who walked to lead off the inning, scored, but Cam Blake, who was intentionally walked, was thrown out at the plate on a relay throw by third baseman Jack Kenley.

Kole Ramage bowed out in the seventh. He threw 4 1/3 innings in relief. He struck out five and walked two, and allowed two runs.

After two good innings of at-bats, the top of the Arkansas order went down in order in the seventh against Texas A&M reliever Bryce Miller.

The Aggies loaded the bases without a hit in the sixth. Jack Kenley, who moved to third base from second after Jordan McFarland pinch hit in the top of the inning, committed two errors, and Arkansas intentionally walked Braden Shewmake with a base open.

Zach DeLoach got ahead 3-1 of Kole Ramage, but Ramage threw two straight strikes, including a swinging strike on a 3-2 changeup. All seven of the Aggies' stranded base runners tonight have been credited to DeLoach.

Just like the series finale against LSU last week, Arkansas loaded the bases with no outs in the sixth inning but came away without any runs. That's a killer.

Arkansas is threatening to come away empty handed with the bases loaded and nobody out in the sixth inning, just like last week vs. LSU. And it's the same part of the order, too.

Texas A&M is going to the bullpen after Doxakis threw 109 pitches - half in his final 1 2/3 innings. Jacob Nesbit is coming to the plate in a must-produce situation.

Arkansas has loaded the bases with no outs. Dominic Fletcher and Heston Kjerstad had consecutive singles, then Jack Kenley reached on an error by the Texas A&M second baseman, who tried to turn a ground ball into a double play, but mishandled it.

Kole Ramage continues to keep the Razorbacks in the game. He retired Texas A&M in order in the fifth inning. Minus that fourth inning hiccup in which he allowed one run on three singles, he has been very good in 3 1/3 innings of relief.

This feels like a key half inning coming up. Arkansas will send three left handers - Dominic Fletcher, Heston Kjerstad and Jack Kenley - to the plate against a tiring John Doxakis.

It was a disappointing top of the fifth for Arkansas, but potentially a beneficial one moving forward. The Razorbacks made John Doxakis throw 25-plus pitches in the inning, but stranded two base runners. Casey Opitz walked to lead off the inning and Casey Martin walked with two outs. Matt Goodheart grounded out to the first baseman to end the half inning.

Doxakis struggled with his command that inning and ran his pitch count up to 83. He went to three balls against the first four Arkansas hitters in the inning. Jacob Nesbit worked a 3-2 count and just missed on what could have been a two-run home run. He got a pitch where he wanted it, but got underneath the ball and flied out in front of the warning track.

The key pitch of the inning was a strikeout of Trevor Ezell on a 3-2 pitch. Ezell chased a pitch in the dirt for the second out after a lengthy at-bat.

Jonathan Ducoff and Allonte Wingate had back-to-back one-out singles against Kole Ramage, and Ducoff scored on Bryce Blaum's two-out infield single. Blaum hit the ball to Casey Martin playing behind the third baseman, and Martin didn't have a throw to make.

Zach DeLoach grounded out to the pitcher to end the inning and strand two base runners. The Aggies have stranded four so far.

Jack Kenley smacked a two-out, two-run home run on a 3-2 count to give the Razorbacks some life. The homer went almost to the same part in the ballpark as Kenley's home run last night. He has now hit 12 this season.

Kenley's homer came on the eighth pitch of his at-bat against Texas A&M's John Doxakis. Kenley fouled off four pitches in the at-bat, then squared one up. He just missed on a couple of hits earlier.

Kenley is 2-for-2 today. The home run scored Heston Kjerstad, who also reached with a two-out hit.

Neither team had a base runner in the third inning. Kole Ramage has retired all four batters he has faced since coming into the game in relief of Patrick Wicklander.

Kole Ramage struck out Zach DeLoach on a 1-2 pitch in the dirt and the Aggies stranded two runners in the inning.

Arkansas will bring the top of the order back to the plate to face John Doxakis in the third inning.

Patrick Wicklander's game is over already. Kole Ramage inherits base runners on first and second base and a 4-0 deficit. Wicklander is in line for his second loss. It's worth noting the Razorbacks have not lost an SEC game that he has started.

Patrick Wicklander walked the first two batters of the second inning. After a mound visit by pitching coach Matt Hobbs, Wicklander retired the next two, but gave up a two-run double off the wall with two outs to Braden Shewmake and the Aggies have a really comfortable lead for John Doxakis.

Wicklander's pitch count is already above 40 after he walked Bryce Blaum with two outs. The Razorbacks have Kole Ramage warming up in the bullpen.

Jack Kenley singled with one out in the second, but didn't advance past first base. John Doxakis struck out Christian Franklin in three pitches, then Casey Opitz in six. The out pitch against the right-handed batters (Opitz is a switch hitter) was the same, a slider that ran inside and that Franklin and Opitz both swung through.

Kenley has been the only hitter to make good contact against Doxakis so far. Matt Goodheart's first-inning single didn't leave the infield, and there have been four weak ground ball outs through two innings.

Patrick Wicklander is off to a poor start for Arkansas, giving up back-to-back home runs to lead off the Aggies' first inning.

Braden Shewmake took Wicklander deep to right field on the second pitch of the game, then Bryce Blaum hit a no-doubter to left field on a 2-1 hanging pitch over the plate.

A two-run deficit could be hard to overcome against Texas A&M ace John Doxakis, who has allowed two earned runs or less in six of his past seven starts.

Matt Goodheart, wearing No. 40 instead of his usual No. 10 because he forgot his red jersey top, singled with two outs in the top of the first inning. Goodheart was stranded when Dominic Fletcher grounded out.

John Doxakis made it look easy against the first two batters of the inning, getting groundouts by Trevor Ezell and Casey Martin. He threw just 13 pitches.