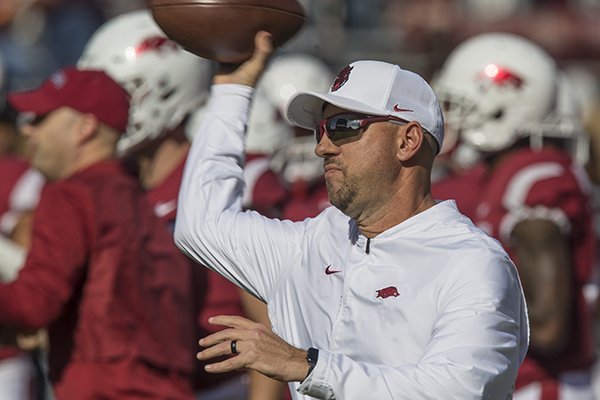 Arkansas running backs coach Jeff Traylor throws a football during warmups prior to the Razorbacks' game against Mississippi State on Saturday, Nov. 17, 2018, in Starkville, Miss.

It meant a lot to running back target Dillon Johnson that University of Arkansas associate head coach and running backs coach Jeff Traylor visited his school on Tuesday.

"I was thinking they came from Arkansas to just come to the school," Johnson said. "That's saying they really want me."

He made an unofficial visit to Fayetteville on March 30 and has plans to officially visit the Hogs on June 12-14. Arkansas will host the last on-campus camp on June 15, and Traylor is hoping Johnson will stay over a day and take part.

"He's wanting me to come and see how he coaches and how he does things," said Johnson, who's birthday falls on the June 15. "I'm going to talk to my parents and see if we can make something happen."

In addition to Arkansas, Johnson also has plans to officially visit Missouri on June 18, Oregon on June 27 and an undetermined date to Mississippi State.

"Those [are] my four schools I'm for sure going to officially visit," he said.

The first trip to Arkansas with his mother, Gwen, helped convince Johnson he needed to come back for an official visit.

"Oh definitely, I didn't know Arkansas was that beautiful," Johnson said. "The hills. It's amazing. When I was there I felt like I was at home. It felt like a home to me."

His mother was equally impressed with the trip.

"She loved how they treated me," Johnson said. "They treated me like family like I've been attending Arkansas. They just showed me a lot of love and it just kind of made her feel good. She wants me to be in a great environment."

A self-professed momma's boy, it's important for Johnson to have his mother to be on board with his school choice.

Johnson's infectious personality is evident within a few minutes of talking to him. He said gets that quality from his mother.

"If you meet her, you'll understand where I get my personality," Johnson said. "I got it from her."

If he decides to be a Razorback, his relationship with Traylor will have played a big role.

"I think coach Traylor and I have this bond that can't be broken," Johnson said. "We see things the same and he loves everything about me and I love everything about him. We get along and we text all the time."

Johnson is an admirer of Sardis (Miss.) North Panola quarterback KJ Jefferson, who signed with the Hogs during the early signing period in December.

"KJ, that guy is an amazing quarterback," Johnson said. "It would be great to be there and be in the backfield with another Mississippi athlete."

He doesn't have a firm time frame for his college decision.

"I was thinking about making my decision after football season, but if somethings happen it could be earlier than that," Johnson said.

When it the time does come for choosing a school, distance won't be an issue.

When he makes his official visit to Arkansas, his father Cedric will join him and his mother. His parents will be supportive of wherever he attends college.

"They told they don't care where I go as long as I feel like I'm at home, and that's the feeling I got when I was at Arkansas," Johnson said.