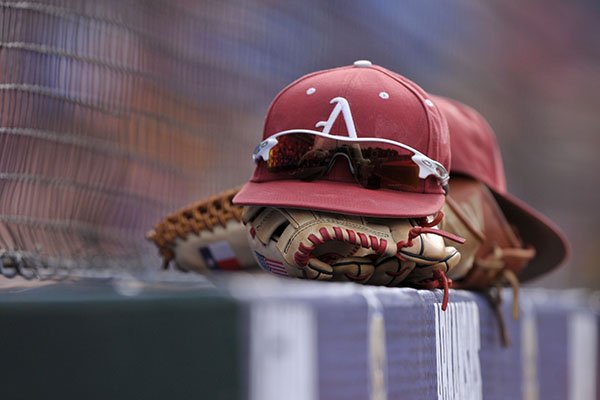 An Arkansas baseball hat sits atop a glove in the dugout prior to an SEC Tournament game against LSU on Sunday, May 28, 2017, in Hoover, Ala.

FAYETTEVILLE — The game time for the series finale between Arkansas and Texas A&M has been changed because of increasing rain and thunderstorm chances Saturday in College Station, Texas.

The No. 4 Razorbacks and No. 19 Aggies are scheduled to throw a first pitch at 11 a.m., Saturday, three hours before their previously-scheduled start time. The game will no longer be shown on SEC Network, but will be aired on the SEC Network-Plus online channel.

Arkansas and Texas A&M are scheduled to play the second game of their series Friday at 6:30 p.m. The Razorbacks defeated the Aggies 7-3 in the series opener Thursday and can clinch a share of the SEC West title with one win in the final two games.

According to the National Weather Service, there is a 60-70 percent chance of showers and thunderstorms - some possibly severe - in College Station beginning early Saturday afternoon and continuing into the overnight hours.

A Southeastern Conference rule would allow the teams to play or complete the third game Sunday if the outcome affects seeding at the SEC Tournament the following week. The Razorbacks have clinched a first-round bye at the tournament, but the Aggies must play in the single-elimination first round Tuesday.