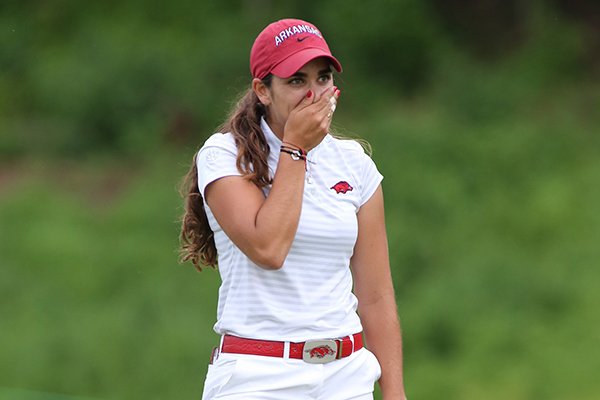 Arkansas senior golfer Maria Fassi reacts after making the final putt during the NCAA Women's Golf Championships on Monday, May 20, 2019, at Blessings Golf Club in Fayetteville.

FAYETTEVILLE — There was 30 mph wind, lightning that caused a 98-minute delay and an early low score posted by one of Maria Fassi’s few threats Monday.

But in the end, a big, bushy ponytail was the only thing that bothered the University of Arkansas senior on Monday on her way to clinching the NCAA medalist trophy. She joined Stacy Lewis, the 2007 champion, as the only Arkansas women with an NCAA title.

Fassi wasn’t ever really close to a bogey in a 5-under par 68 that gave her a four-shot victory at the Blessings Golf Club.

Florida’s Sierra Brooks finished second with 75-67-73 for 215. Arizona’s Bianca Pagdanganan, who was tied with Fassi entering Monday's round, finished third after shooting a 1-over 74 to finish the tournament 2-under par.

The Razorbacks will advance to the eight-team match play bracket for the first time since that was introduced on the women’s side in 2015. The pairings will be announced around 7 a.m. Tuesday when the final scores are posted. Arkansas will advance as the fourth seed, likely against Wake Forest in fifth.

Fassi did two things as she waltzed around one of the most difficult courses to host an NCAA championship: fix her ponytail and thank the several-hundred Arkansas fans in her gallery. If the score posted by Brooks some six hours earlier bothered Fassi, it never showed.

“Thank you for coming,” Fassi said over and over, well before her victory was assured. She was thanking them on the front nine, sometimes thanking fans twice.

After firing her approach to within 15 feet from the 18th fairway, she joined Razorback fans calling the Hogs with Arkansas head coach Shauna Taylor. Then, Taylor and Fassi joined hands for the triumphant walk to the green, fulfilling their dream.

“I told Shauna I don’t know how many times that we would walk down 18 holding hands and I’d be national champion,” Fassi said. “I dreamed it, but this was so much better, way better than what I dreamed.”

“Oh, gosh we have had this conversation a lot on what it would be like," Taylor said. "When this tournament was first announced (as Arkansas hosting), we had those talks, but it was way better than what I envisioned. It was cooler in person.”

Fassi, a product of Hidalgo, Mexico, earned her 10th victory at Arkansas and second in the past month. She won the SEC championship in Birmingham, Ala., on April 19, and was second in the Augusta National Women’s Amateur earlier this spring.

Fassi turned down a chance to turn pro earlier in the year in order to play at Augusta, but mostly to close out her Arkansas career at home.

“Coming back for the national championship was the main reason I came back,” Fassi said. “It was great to play at Augusta, but to come back here and make match play for the first time was why I came back.”

Fassi dominated with a string of 300-yard blasts off the tee, generally 50 yards in front of her playing partners all three days. Her approaches were underneath the difficult pins, often leaving her routine putts.

There was a smile after almost all of her powerful shots, then a nod to her adoring fans. She seemed to enjoy every minute.

“I enjoy getting to meet people,” she said. “It’s great to get to travel and see all these courses. If I hit a bad shot, I always want to smile. I feel like I want to show that I’m having a pretty good time playing.”

There were no bad shots Monday as Fassi became the first player to win medalist honors on her home course since New Mexico’s Caroline Keggi did it in 1987.

Fassi held a four-shot lead when she birdied the 12th, just a few minutes before the horn blew to halt play at 4:19 p.m. She had time during the break to look at the individual standings.

“I came in and saw where I was standing,” Fassi said. “After that, I tried to play smarter-type shots. I knew I had a cushion.”

She beat her 54-hole target score of 7 under, although she admitted to getting out of the car at the course thinking it might be too low.

“I knew with the (wind) conditions, it was going to be (a higher score),” she said. “I walked outside and knew I wouldn’t have to go that low.”

Taylor said Blessings Golf Course is never easy, but Monday’s conditions were brutal, which made Fassi's score all the more impressive.

“This course played harder than maybe ever,” Taylor said.

Asked to put Fassi’s achievement in perspective for the UA women’s program, Taylor said, “Stacy helped put us on the map, but Maria Fassi put on the exclamation point.”

Taylor wasn’t surprised to see Fassi thank fans throughout the long day. It mirrors what the coach emphasizes.

“We talk a lot that giving is getting,” Taylor said. “It’s getting to give a thank you. When you do give, you get back and this was a perfect example.

“I want them to know an event like this doesn’t pop up overnight. It takes a village to make it happen.”

Fassi gave a lot of hugs after getting drenched by teammates in the middle of the 18th green. Her mother, Fabiana, waited patiently, as did course founder John H. Tyson. Fassi embraced both.

“Coming here was the best decision I made in my life,” Fassi said. “I’m lucky for this opportunity to be a Razorback.”

Fassi said there wasn’t anything that was going to ruin her smile Monday - not the wind or anything else. She said her coaches, Taylor and assistant Mike Adams, put the Razorbacks on to the course for practice in a similar wind.

“But I never played it like this for a tournament,” she said. “It was tough. I kept telling the players who came here that I sure hadn’t seen wind like this here.”

It did blow Fassi’s ponytail. She’d flip it behind her every time the wind tossed it under her chin, and then she’d smash a shot and smile.