'Coolest thing I've ever seen on a baseball field': Van Horn praised for reaction to child 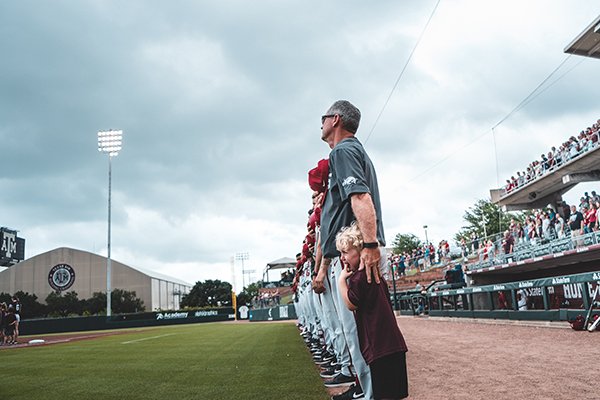 Arkansas coach Dave Van Horn consoles a child during the national anthem prior to a game against Texas A&M on Saturday, May 18, 2019, in College Station, Texas.

FAYETTEVILLE — Before Texas A&M's home baseball games, young children are allowed to go on the field and stand next to their favorite Aggies player while the national anthem is played.

For one young boy on Saturday at Blue Bell Park in College Station, Texas, his favorite Aggie turned out to be University of Arkansas Coach Dave Van Horn.

This particular youngster became confused and began crying after he got onto the field. Rather than go stand by a Texas A&M player, he was by himself.

"I see this little boy, and he's looking around and he's crying," Van Horn said. "He was definitely in distress. I think he was starting to panic a little bit.

"He was looking for his mom or his dad or somebody he knew or recognized, and he wasn't finding anybody."

Van Horn, who was standing on the first-base line along with his team, motioned for the boy to come over to him.

"Three or four us tried to wave him over, and then he saw Coach Van Horn waving at him, and the kid ran right to him," Arkansas pitching coach Matt Hobbs said. "Coach Van Horn put his arm around the kid, and the kid just hugged his leg the whole time.

"It was the coolest thing I've ever seen on a baseball field."

Hobbs said the boy reminded him of his 3-year-old son Will.

"As a parent, when you see your child in distress like that, it's very tough," Hobbs said. "So for Coach Van Horn to help the way he did, as a parent, you're like, 'Man, thank you.'

"I wasn't waterworks crying, but I got a little emotional watching it. It's one of those things where if that ever happened to your kid, you wish someone would do for him what Coach Van Horn did."

A photo of the boy clutching Van Horn's leg received a lot of attention on social media.

"I just felt bad for him and I wanted to comfort him," said Van Horn, who has two grown daughters. "That's what I would have wanted somebody to do for one of my kids if they were out there crying."

After the national anthem ended, one of Texas A&M's Diamond Darlings came and got the boy and made sure he got back safely to his family.

"We may not have won on the field that day, but what Coach Van Horn did was a huge win for our program," Arkansas pitcher Matt Cronin said. "It showed what kind of guy we have leading us and how much he cares about people."