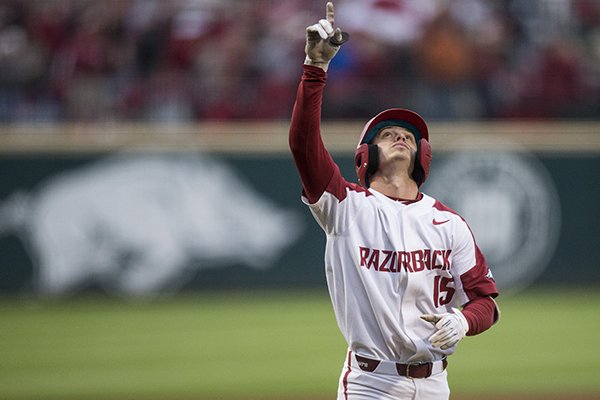 FAYETTEVILLE -- The University of Arkansas baseball team had six All-SEC selections to lead the conference's 14 teams, but no Razorback made the first team.

SEC coaches voted for the teams and other conference honors, which were announced Monday.

Conference champion Vanderbilt and Mississippi State -- which shared the SEC West title with Arkansas but was swept by the Razorbacks in a three-game series at Baum-Walker Stadium -- each had four first-team All-SEC players.

"As far as us not being on the first team, there's really not a lot for me to say," Razorbacks Coach Dave Van Horn said. "It is what it is. I'm not upset about it.

"We dominated the second team. We're well-represented on the overall SEC team. The only thing I'm disappointed about is Isaiah Campbell not making the team with his numbers."

Campbell, the Razorbacks' junior right-hander, is 10-1 with a 2.50 ERA and has 97 strikeouts and 15 walks in 90 innings, but he was not among the four All-SEC starting pitchers.

"I think some people needed to study it a little bit better and see what Isaiah did," Van Horn said. "He didn't miss any starts. He pitched every weekend, and he was pitching Game One. I know he's a first-team all-conference player."

"I feel like the pitching in the league this year was really, really strong and really, really deep," Van Horn said. "Every team we played had one or two guys that you can see pitching for a long time in professional baseball.

"You almost wish there would have been a few more [All-SEC] spots. Four starting pitchers? I think this year they needed six."

"With the consistency and the numbers he's put up this year, I feel like he's been one of the top starting pitchers in the SEC," Cronin said. "I think he deserves more recognition than what he was given there."

Ezell, a graduate transfer from Bryant who made the switch from playing second base at Southeast Missouri State to playing first for Arkansas, was voted to the SEC All-Defensive team along with Fletcher, who is known for his highlight catches in center field.

"That's a lot of representation for the Razorbacks," Cronin said. "It just really shows how well-rounded this team is."

"There's a lot of talent in the SEC, obviously, so it's kind of hard for the coaches to decide who gets what," Martin said. "For us to have six players make All-SEC -- and have guys on the all-defense and all-freshman teams -- that's definitely cool.

"These awards aren't just for the guys that got selected. I think it goes to the whole team, what we've accomplished together. That shows the love and trust we have in each other and the accountability we hold each other to."