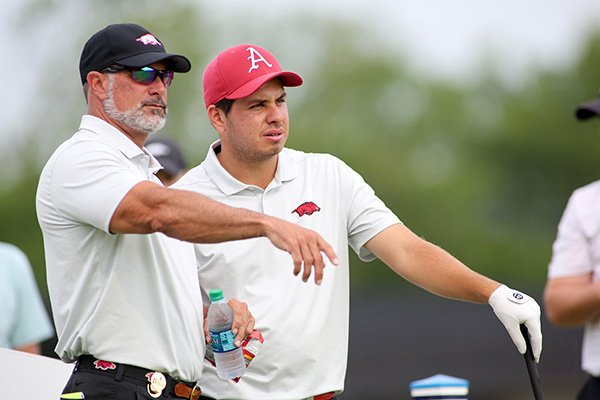 Perico at a glance

NOTEWORTHY Posted six victories on the junior golf circuit, including the IMG Junior World Championship at Torrey Pines in 2017. … Won the Jerry Pate Intercollegiate with a 54-hole score of 197, a course and school record. … Season scoring average is 71.34, a freshman record at Arkansas and fourth in school history. … Placed fourth at Gopher Invitational behind teammate Willam Buhl. … Has played in the Latin American Amateur three times, finishing 4th, 13th and 25th.

That missive was email gold for the Razorbacks.

Perico broke the UA freshman scoring average at 71.34 this season and advanced as an individual to play in the NCAA Championships today at Blessings Golf Club, the home course of the Razorbacks. Perico is scheduled to tee off from No. 1 at 9:02 a.m. in a pairing with Billy Tom Sargent of Western Kentucky and Kyler Dunkle of Utah.

Perico, a native of Lima, Peru, who prepped at Bishops Gate Golf Academy outside Orlando, Fla., while attending Montverde Academy, had planned to sign with the University of South Florida along with his buddy, Chilean star Joaquin Niemann. However, when Niemann, the world's No. 1 ranked amateur from May 2017 to April 2018, elected to turn professional, Perico changed plans.

That's where Arkansas' pipeline to Latin America, established by McMakin and UA women's Coach Shauna Taylor, paid off. The recruiting flow to Latin countries has produced Gaby Lopez, Regina Plasencia, and NCAA individual champion Maria Fassi on the women's side, and Nicolas Echavarria, Alvaro Ortiz and Luis Garza from the men's side.

"Luis and Alvaro, they were like, 'We know you de-committed, and Arkansas is a pretty good place,'" Perico said. "So I reached out and it went from there."

Perico finished sixth at the NCAA Austin Regional two weeks ago after posting two eagles among his first five holes. In the tournament before that, Perico helped the Razorbacks win the SECs by going 3-0 in match play after he placed eighth in stroke play.

"I was in contention," Perico said. "So I've put myself in the position of winning two weeks in a row and I'll just try to do the same thing here."

Perico's effervescent personality will give him a chance to become memorable on the UA campus during his college days. His game, a combination of power and control off the tee, big irons, with chipping and putting that are still a work in progress, has a chance to put him on the world golfing map.

"He's got the full package," McMakin said. "He's a joy to be around every day. He comes to practice every day with a great attitude. So he's a great kid, and obviously is a huge talent to go with that personality. He's got a great future."

McMakin marveled at Perico's three-round domination of the Jerry Pate Intercollegiate, which he won with a 64, 65 and 68.

"That tournament has been going on for 30 years with the best players from Auburn and Alabama, Florida State and Florida playing there," McMakin said. "He set the record by like 5. ... When he gets going it doesn't stop."

Perico finds friends in every classroom, clubhouse and casual setting. He's a regular at Razorbacks football, basketball and baseball games and counts members of all those teams as his friends.

He is up front and honest about his own career arc.

Asked if he was a natural when he took up the clubs at age 5, Perico replied, "I sucked man. Yeah, I was bad. I was a bad golfer. I couldn't break 80."

He said he decided at age 14 he was going make golf his thing.

Now he considers his game "steady, top to bottom. I drive it pretty good. I hit the ball good. I've been putting better. My short game is decent.

"When my putter is on, like everyone, when I feel really confident in my putter and I get off to a fast start, I normally shoot a low score. I rely a lot on my ball striking."

McMakin thinks Perico will thrive in the spotlight of playing at home.

"If he gets off to a good start, watch out," McMakin said. "Because he builds that confidence. And he knows these greens a little bit. He doesn't have any problem from tee to green out here, or anywhere. It's crazy."

Perico had success as a junior in South America and thought he was ready to challenge peers in the U.S. when he got paired with Matthew Wolff, now a sophomore at defending NCAA champion Oklahoma State.

"I was decent," Perico said. "But like for example, I came to my first invitational for the AJGA because I got an exemption from South America. I was paired with Matthew Wolff the first round and I mean he slapped me around.

"I thought I was decent ... but then you come here and I realize that I suck, you know. I took it well. I was like, 'I've got to get to work.' I've known Matt since I was 15 and he's a great guy. I played with other guys who are now my friends."

Wolff said he remembered that round.

"He was a good player then, but like all junior players he was a little inconsistent," Wolff said. "Sharpening up around the greens and course management and maturity is what he struggled with and so did I. I think coming to college he's learned a lot and transformed into a world class player."

He is tight with Fassi, a native of Hidalgo, Mexico, who won NCAA and SEC titles this year among her 10 career victories.

"Maria is a superstar," Perico said. "She's probably one of my best friends. ... We talk about everything. She's like my sister. She's awesome."

Perico took in the atmosphere surrounding Fassi in her runner-up finish at the inaugural Augusta National Women's Amateur and her title run at Blessings earlier this week.

"I just want to enjoy it man," he said. "I want to make this place proud. I'm the new guy here and a lot of people don't know me.

"I'm playing with a bunch of my friends and those guys are really good. I just want to enjoy it. It's a special week and I just want to make it memorable."