Tables turned: Hogs lose seat as Rebels get to Cronin 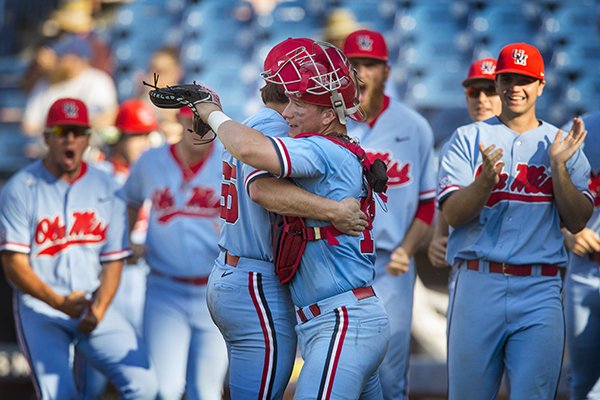 Ole Miss pitcher Parker Caracci and catcher Cooper Johnson embrace after the Rebels defeated Arkansas during the SEC Tournament on Friday, May 24, 2019, in Hoover, Ala.

HOOVER, Ala. -- University of Arkansas closer Matt Cronin got the better of Ole Miss on Wednesday in the SEC Tournament.

Friday it was the Rebels' turn to get Cronin.

Two Rebels were on base when Cronin came into the bottom of the eighth inning, and both scored to give Ole Miss a 3-2 victory at Hoover Metropolitan Stadium and eliminate the Razorbacks from the tournament.

Arkansas held on to beat Ole Miss 5-3 on Wednesday when Cronin came in with two runners on base and two outs in the eighth inning and struck out Chase Cockrell. Then Cronin struck out Thomas Dillard, Grae Kessinger and Tyler Kennan -- the Rebels' 1-2-3 hitters -- on a combined 11 pitches in the ninth inning.

Dillard got some payback on Friday in the eighth inning when he drilled Cronin's first pitch -- after he replaced Zebulon Vermillion with runners on first and second base -- up the middle for an RBI single that scored Cooper Johnson to tie the game 2-2.

"I've said it all year, I think he might have the best fastball in the country," Dillard said of Cronin. "He has electric stuff, and he's blown it by me a few times."

Dillard, a switch-hitter who batted right-handed against the lefty Cronin, said he was going to be aggressive.

"If anything, I was going to pull it into their dugout," Dillard said. "I wasn't going to be late."

"With the ride on his fastball and his backspin, when it's up, it's really, really good," Dillard said. "Luckily I got a pitch down and happened to put a good swing on it."

Dillard said there was no doubt in his mind he would face Cronin rather than Vermillion when catcher Zack Plunkett went to the mound.

"I went back to the dugout and got my right-handed helmet and put it on without even looking," Dillard said. "I knew it was Cronin.

"You have to gear up for his fastball. He's got a great fastball. Today I just got a fastball I could hit, but he's going to have a lot of success here [in college], and I think he'll be a major leaguer one day."

Arkansas Coach Dave Van Horn said Cronin made a good pitch, but Dillard was ready for it.

"I call it cheating to the fastball pretty good," Van Horn said. "The pitch was down, knee-high, and he likes them down there, especially from the right side.

"We feel like [Cronin] did a good job. Just a good piece of hitting."

Jacob Adams, the Rebels' junior second baseman from Conway who reached first base when Vermillion hit him with a pitch, advanced to third on Dillard's single and scored on Kessinger's sacrifice fly to center fielder Dominic Fletcher to put Ole Miss ahead 3-2.

"Those guys are veterans," Van Horn said of Dillard and Kessinger. "Those are their dudes. They hit 1 and 2 in the order, and one's a switch-hitter and one's probably going to be playing in the big leagues, maybe both of them.

"It's good competition, and they learned a little bit about how to hit him the last time they faced him. It's only been 48 hours, so hats off to them for getting the job done."

While the No. 23 Rebels (36-24) will play Georgia at noon today in a semifinal game, the No. 5 Razorbacks (41-17) will head home, where they're assured of hosting an NCAA regional at Baum-Walker Stadium next weekend.

"Time to get ready for that regional," Van Horn said.

Arkansas got the tying run on in the ninth inning when Trevor Ezell drew a two-out walk, but Ole Miss closer Parker Caracci got Casey Martin on a groundout to end the game.

Matt Goodheart hit a two-run home run after Ezell walked to give the Razorbacks a 2-0 lead in the fourth inning against Ole Miss freshman starter Gunnar Hoglund.

"I hit a two-strike fastball," Goodheart said. "Really, I was just in defense mode, trying to foul off the close pitches and got enough of that one."

Fletcher and Heston Kjerstad followed Goodheart's home run with singles, but Hoglund limited the damage when Jack Kenley lined out and Jordan McFarland flied out.

"Great effort by Gunnar," Ole Miss Coach Mike Bianco said. "A true freshman that just seems to get better and better with each outing."

The Rebels made it 2-1 on Kevin Graham's home run in the fifth inning off freshman right-hander Connor Noland, who like Arkansas' other starters at the SEC Tournament was on a pitch count.

Noland went 5 innings and allowed 1 run, 2 hits and 1 walk with 2 strikeouts. He threw 73 pitches, including 47 strikeouts.

"We had a good plan going in, just keeping us on a pitch count," Noland said. "Obviously, we want to rest up and get ready for that regional. That's our main focus.

"I thought it went well today. I attacked the zone and came after them."

Bianco praised Cronin when asked about the Rebels getting to him in Friday's game after he dominated them Wednesday.

"He's really good," Bianco said. "I think sometimes as closers it's unfortunate that there's so much made about one pitch or one at-bat.

"You can live and die with a pitch, but he's won a lot more games like this than he's lost. He'll have a lot more success in his career.

"It's just that when you're at the end and it's that close, sometimes it doesn't go your way.

"You can sit there and try to break it down, but at the end of the day he faced two really good hitters and they got a couple good swings against him. That's baseball."

The game was called after seven innings under the 10-run mercy rule. The Tigers (37-23), who lost a 17-inning game against the Bulldogs (46-13) two nights earlier, will face top-seeded Vanderbilt in today’s semifinals.

LSU had five runs in the third inning and seven in the fourth.

Brandt Broussard and Zach Watson both had RBI doubles for the Tigers.

Mississippi State got RBI singles from Dustin Skelton and Tanner Allen. The Bulldogs were on their fifth pitcher by the end of the fourth with starter JT Ginn (8-4) failing to make it out of the third. LSU is seeking its 13th conference tournament championship.

NOTE All games televised on SEC Network, except the championship game, which will air on ESPN2.

Vanderbilt vs. LSU, 30 minutes after conclusion of first game