Hogs see past prior to future 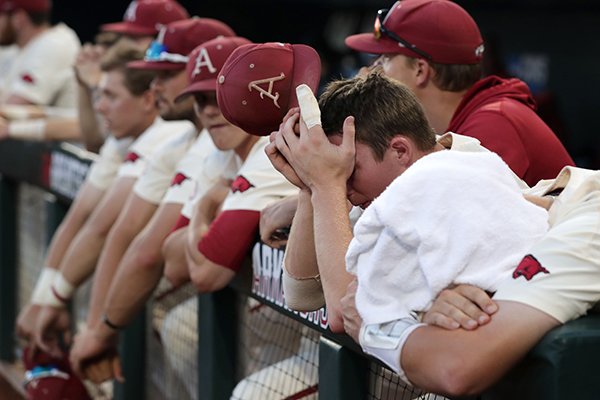 Arkansas players react after the final out of the College World Series championship game against Oregon State on Thursday, June 28, 2018, in Omaha, Neb. The Razorbacks lost 5-0.

FAYETTEVILLE -- Before the University of Arkansas baseball team learned which squads would join it in the NCAA regional this weekend at Baum-Walker Stadium, the Razorbacks had to relive the gut-wrenching end to last season when they came within a pitch of winning the national championship.

As the Razorbacks watched in their locker room Monday, ESPNU replayed a foul popup by Cadyn Grenier in game two of the finals that, if caught, would have been the final out and resulted in the first baseball national title for Arkansas.

Given new life, the Beavers scored three runs in the ninth inning to win 5-3 to stay alive.

ESPNU then showed Oregon State's players celebrating the national championship when the Beavers beat Arkansas 5-0 the next game.

"It's something that's sore to all of us," Arkansas sophomore right fielder Heston Kjerstad. "It leaves a bitter taste in your mouth.

"But that's something you've got to live with. It's life, and not everything's going to be all freakin' rainbows and stuff like that. You've just got to keep going."

Arkansas first baseman Trevor Ezell, a graduate transfer from Southeast Missouri State State, wasn't with the Razorbacks last season but said he has a sense for what his teammates were feeling as the highlights were shown on ESPNU.

"Maybe it'll just make guys eager to get back and actually win it this year," Ezell said. "I think it might just light the fire a little bit."

It will be the first time Arkansas has played CSSU, which earned its sixth NCAA Tournament bid by beating Bryant 3-2 to win the Northeast Conference Tournament.

"We don't know a whole lot about Central Connecticut," Arkansas Coach Dave Van Horn said. "We'll try to find out about them as much as we can.

"Cal and TCU have always been good in baseball. It's going to be a great regional."

"We've done that plenty of times this year, and we've paid for it," said Martin, who mentioned the University of Arkansas at Little Rock's 17-7 victory over the Razorbacks. "It's baseball. Sometimes the ball hops a little funny, as I've been told growing up.

"It doesn't matter how good you are or how bad you are. You can go in and beat any team."

Bryant beat Arkansas 4-1 in the opening game of the Manhattan (Kan.) Regional in 2014.

"They're dangerous," Van Horn said of lower-seeded teams. "They come in with nothing to lose, no pressure on them, happy to have the opportunity to play in a regional.

"Our job as coaches is to make sure our team shows up and takes care of business and plays well. A lot of times these teams will have a really good arm, a first-round player, and you've got to make sure you're educated on that as much as you can.

"We don't harp on the other team and don't talk that much about the other team as to what they have. We definitely are going to point it out to [the Razorbacks], but it's really more about what we need to do as a team.

"That's kind of been our motto all year. We play and do what we do well, we have a chance to beat anybody, and I think we'll keep that going."

Martin, Kjerstad and junior center fielder Dominic Fletcher are returning starters for Arkansas from last season's team. Several pitchers are back -- including No. 1 starter Isaiah Campbell and closer Matt Cronin -- as well as reserves who are now starting.

"A little surprised it was in there," Martin said of watching the Oregon State highlights as the players waited to see the NCAA Tournament's 64-team field revealed. "I don't think many of us really cared to see that."

Martin said how last season ended has served as fuel for the Razorbacks to advance to the College World Series in consecutive seasons, which has never been done at Arkansas.

"There's nothing more we want than to go back," Martin said. "We'd like to redeem ourselves. It gives us quite a bit of motivation."

Van Horn was asked about his reaction to having to watch the Oregon State highlights.

"It's old news, in my opinion. It's a new year. I don't need any motivation. I put that to bed a long time ago.

"Once this season started, it helps get rid of some of the past. You learn from the past, and that's how you get better and I think maybe being in Omaha and not winning last year has really helped our younger players try to establish their legacy here and what people are going to remember about the '19 team, the '20 team and down the road.