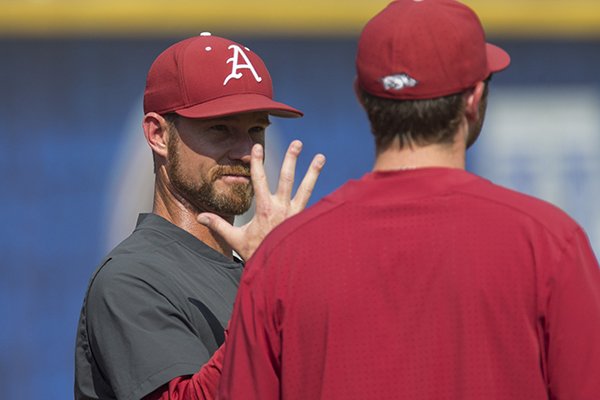 Arkansas pitching coach Matt Hobbs talks to pitchers prior to an SEC Tournament game against Georgia on Thursday, May 23, 2019, in Hoover, Ala.

FAYETTEVILLE -- The Minnesota Twins' decision to make Sherwood native Wes Johnson the first college pitching coach to go directly to the major leagues as a pitching coach is working out pretty well.

Johnson, hired from the University of Arkansas in November, has helped the Twins start 36-17 for the best record among MLB teams going into Tuesday night's games.

The guy who replaced Johnson at Arkansas is doing an impressive job, too.

With Matt Hobbs taking over as pitching coach, the Razorbacks (41-17) are the No. 5 national seed going into Friday's NCAA Fayetteville Regional opener against Central Connecticut State (30-21) at Baum-Walker Stadium.

Hobbs has helped put Arkansas in position to make another run to the College World Series in Omaha, Neb., after the Razorbacks finished second to Oregon State last year.

Arkansas shared the SEC West title with Mississippi State with a 20-10 record -- the most conference victories in Dave Van Horn's 17 seasons at the Razorbacks' coach.

"I think Matt's done a great job here," Van Horn said. "You put yourself in his shoes, coming into a program that finished second in the country last year with the fanbase, expectations, the league. Following a pitching coach that goes to the big leagues. I mean, there probably couldn't have been a whole lot more pressure than that."

Hobbs, who came to Arkansas after serving as the pitching coach at Wake Forrest the previous four seasons, hasn't let the pressure get to him.

"Coach Johnson, he's obviously one of the best in the country, and it showed by him going straight to the Minnesota Twins and becoming their pitching coach," Arkansas redshirt junior right-hander Isaiah Campbell said. "But I think Coach Van Horn did a really good job of getting Coach Hobbs.

"If we weren't going to have Coach Johnson, I think Coach Hobbs is the next best pitching coach in the country. He's done a really good job with this staff getting us to where we are now."

Campbell (10-1, 2.37 ERA) has gone from being the Razorbacks' No. 3 starter last season to their ace under Hobbs' direction.

Freshmen Connor Noland (2-4, 3.71 ERA) and Patrick Wicklander (5-2, 4.15 ERA) have developed into SEC starters, and Hobbs has managed the bullpen well despite having four relievers out at times during the conference season because of injuries or soreness.

"I've seen our guys get better, especially the second half of the season," Van Horn said. 'We've dealt with some things that a lot of times will put you in a little bit of a downswing, especially on the weekends, and we haven't had that really, for the most part."

Hobbs missed going through fall practice with the Razorbacks because he wasn't hired until Nov. 27, but he said the transition has been smooth.

"I think the reason why it's gone well is you have veteran pitchers," said Hobbs, who mentioned Campbell along with juniors Matt Cronin, Cody Scroggins and Jacob Kostyshock, and redshirt sophomore Kevin Kopps. "Guys who have been through this before. They were really open to everything I wanted to do when I got here.

"They were all open to getting to know me first, instead of going, 'What's up with this new guy?' It was never like that. It was always, 'All right, here's the guy that's going to be leading our pitching staff and what can he bring to us?' "

Van Horn was hired as Nebraska's head coach 35 days before the start of the 1998 season, so he understands the challenge Hobbs faced coming to Arkansas.

"I think he's done a good job of evaluating each player individually and not just as a whole group. He's tried to get to know them, and they seem to like him. They respond to him."

TCU Coach Jim Schlossnagle, whose Horned Frogs play California on Friday night in the Fayetteville Regional, said Hobbs is a coach he would love to have on his staff.

"I know Matt is super respected in our profession," Schlossnagle said. "There were times when I thought I was going to be losing [pitching coach] Kirk Saarloos to head coaching jobs -- he had the chance to be the head coach at Stanford and Rice -- and Matt was a guy on my list for a lot of reasons. He's a really attractive coach."

Campbell said Hobbs and Johnson are similar in some of their training methods and how they embrace analytics, but with a few twists.

"I think I've given them some new things to do, whether it's been pre- or post-throw work," Hobbs said. "Some new technology that was different than what was going on before."

Hobbs hasn't made drastic changes to the pitchers' routines.

"The personalities are different," Van Horn said of Hobbs and Johnson. "But as far as the way they coach, probably not a whole lot of difference there."

"Coach Hobbs is a little more laid-back," Campbell said. "But I've seen him behind closed doors get after some of our guys. He's gotten after me, too."

"He didn't come in and just try to change everybody," Van Horn said. "He let them pitch and show him what they could do. He didn't disrupt each pitcher individually. He just tried to help them."

Hobbs, who was a pitcher and pitching coach at Missouri, knew Van Horn by reputation, but not personally. He said he talked extensively with Tennessee Coach Tony Vitello -- Hobbs' former Missouri teammate and an Arkansas assistant from 2014-17 -- and Johnson about Van Horn.

"The biggest attraction for me to come to Arkansas was how highly Tony and Wes spoke of Coach Van Horn," Hobbs said. "But you never know how consistent people are until you're around them every day.

"I think a lot of people that you meet in your life kind of disappoint you, because you put them on a pedestal a little bit, and then you meet them and it's not what you expected.

"But Coach Van Horn has been the exact opposite of that. This guy is a machine of consistency in terms of what he wants to talk about with the pitching, what he wants to know about who's available and what situations we can use guys in.

"It's just incredibly impressive. I couldn't be in a better situation than what I have here."

Matt Jones of WholeHogSports.com contributed to this article.