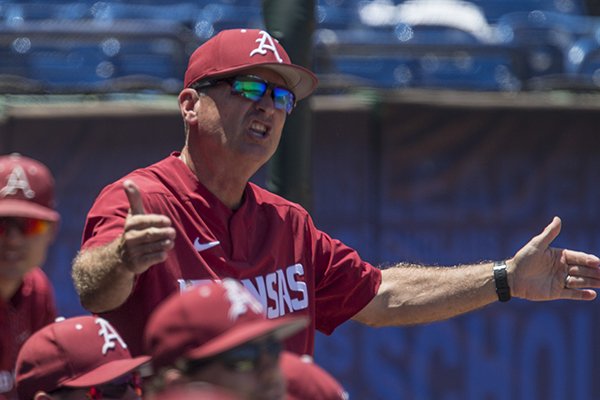 Arkansas coach Dave Van Horn gestures from the dugout during an SEC Tournament game against Ole Miss on Wednesday, May 22, 2019, in Hoover, Ala.

FAYETTEVILLE -- The University of Arkansas baseball team is among a record-tying 10 for the SEC to make the NCAA Tournament.

The SEC was the first conference to have 10 teams in the NCAA Tournament in 2014. The record was matched by the Atlantic Coast Conference in 2016, and again by the SEC last year.

"Well, the league's good," Razorbacks Coach Dave Van Horn said. "I've made the comment all year that, as far as age, the league's older.

"The depth of the league, especially in the Western Division, is incredible."

Six of seven SEC West teams are in the NCAA Tournament with Arkansas being joined by Mississippi State, LSU, Ole Miss, Texas A&M and Auburn.

"Alabama was better this year," Van Horn said. "But the six teams above them all made regionals."

Other SEC teams in the NCAA Tournament are Vanderbilt, Georgia, Tennessee and Florida.

Missouri is No. 31 in the NCAA's Ratings Percentage Index, which ranks teams by their performance and strength of schedule, but losing their final four games doomed the Tigers.

Florida was 13-17 in SEC regular-season games while Missouri was 13-16-1, but the Gators swept a three-game series at Columbia, Mo., then the Tigers lost to Ole Miss 2-1 in the SEC Tournament.

Missouri's tie was at Texas A&M when the game had to be stopped after 10 innings with the score 2-2 because of the Tigers' travel curfew.

Tennessee replaced South Carolina in making the NCAA Tournament this year compared with the SEC teams that were in it a year ago.

Seven SEC starting pitchers are among 25 semifinalists for the Golden Spikes Award, which is presented by USA Baseball to the most outstanding amateur baseball player in the country.

With All-SEC teams being limited to four starting pitchers -- two on the first team and two on the second team -- that meant three Golden Spikes Award semifinalists wouldn't get All-SEC honors.

Georgia's Emerson Hancock and Mississippi State's Ethan Small were voted by coaches as the All-SEC first-team pitchers, and Missouri's T.J. Sikkema and Kentucky's Zack Thompson were voted to the second team.

"It didn't bug me at all," Campbell said of the SEC snub. "I mean, the four guys that were in front of me, they're all really good pitchers.

"That just shows you how unbelievable the pitching is in the SEC, where three guys on the Golden Spikes list don't get All-SEC honors. For me, it's just go out there and prove what I can do, and the numbers are going to speak for themselves."

California and TCU will play the second game at 6 p.m.

"I like to play the first game, and the reason being weather can really put a spin on the whole tournament," Van Horn said. "You play the first game and the second game gets in a rain delay into the night, and you've got to play it the next day and then play a couple of games. It can get a little bit rough."

The weather shouldn't be a factor Friday, when the forecast calls for a high temperature of 80 degrees with no chance of rain.

"The weather is supposed to be beautiful Friday," Van Horn said. "It will be perfect. Should be great for the fans."

Van Horn said he doesn't believe playing on Friday afternoon will keep the crowd down.

"I wouldn't think so," he said. "I think we'll have a good crowd, and they'll be loud and it should be a great atmosphere."

The Razorbacks opened their regional at home last season with an afternoon game that had an announced crowd of 9,215 for their 10-2 victory over Oral Roberts University.

Arkansas is a combined 49-24 in games against the other teams in the Fayetteville Regional.

The Razorbacks are 45-19 against TCU, 4-5 against California and never have played Central Connecticut State.

Arkansas and TCU last played in 2006 when the Razorbacks beat the Horned Frogs 5-2 in Edinburg, Texas.

The Razorbacks and Bears last played in 2014 when California won 2-1 in Berkeley, Calif.