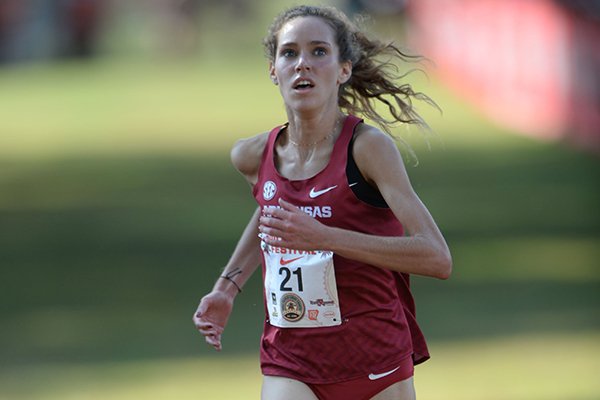 Arkansas' Katie Izzo comes in to the finish Saturday, Oct. 5, 2019, during the Chile Pepper Cross Country Festival at Agri Park in Fayetteville.

Izzo, a graduate transfer from Cal Poly-San Luis Obispo, had been the Razorbacks' second runner all season behind fellow senior Taylor Werner.

"I told Katie, 'There is no pecking order on this team. If you feel good, go,' " Harter said. "So she took it literally and rose to a new standard for herself."

Izzo won the SEC individual title -- with Werner taking second -- to lead Arkansas to its record seventh consecutive conference title. No other SEC team has won more than three titles in a row since the SEC started running a women's championship in 1983.

The Razorbacks dominated with their five scorers all finishing in the top seven as Arkansas won with 21 points at the Kentucky Horse Park. Ole Miss was second with 93 points.

"That was a big breakthrough race for Katie," Harter said. "Before the season, she had no expectations and was a kid that was constantly injured. She was kind of in survival mode as far as racing goes.

"But when she got here, she started training next to Taylor right away and quickly became one of our top runners."

The Razorbacks won their 20th SEC cross country title since joining the conference for the 1991 season. The other SEC teams have combined for 17 titles.

"When you go in as a prohibitive favorite, it's not easy to try to live up to the hype and the expectations," Harter said. "But I think our kids just did a great job of exceeding what was expected.

"There are some very, very good individuals running for the other schools in this conference, and for our kids to be able to handle them to make our team score as low as we did was a bonus."

Izzo is the first Razorback to win the individual title since 2015 when Dominique Scott won for the third consecutive year. Overall, 11 Razorbacks have combined to win 16 individual SEC titles.

"The course was very demanding, and it was really, really cold," Harter said of the wind chill dropping to 25 degrees during the race. "But all in all, it was a real positive experience for us."

Arkansas will be at home Nov. 15 to run in the NCAA South Central Regional Championships on the UA's Agri Park course. The top two teams at the regional meet automatically qualify for the NCAA championships Nov. 23 in Terre Haute, Ind.

"Everybody's walking away healthy from the SEC meet," Harter said. "We'll be ready to go in two weeks."