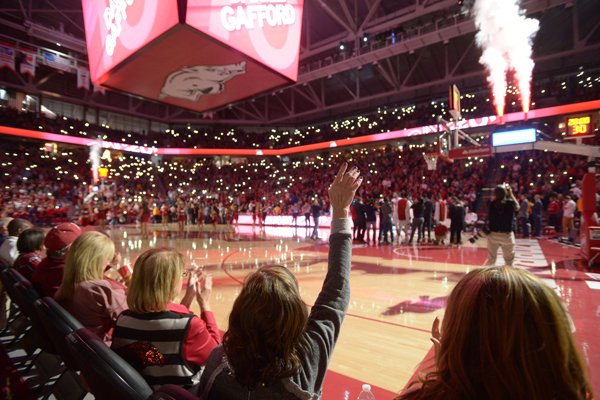 Arkansas fans watch as starting lineups are announced during prior to a game against Missouri on Saturday, Jan. 13, 2018, in Fayetteville.

FAYETTEVILLE — The University of Arkansas will expand alcohol sales to basketball games at Bud Walton Arena later this month.

Beer and wine will be available for purchase beginning with the Razorbacks’ Nov. 16 men’s game against Montana, and Nov. 17 women’s game against Stony Brook. Alcoholic beverages previously have only been available to fans in premium-seating areas, such as in suites and on the floor.

Alcohol will be sold at designated stations on the arena concourse and in the south lobby next to the team store. Purchasers will be required to show identification to verify their age and will be limited to two drinks per transaction.

Alcohol sales will stop following the 12-minute timeout in the second half for men’s games and at the end of the third quarter for women’s games, and there will be no alcohol allowed in the student section.

Florida and Missouri have announced they will sell alcohol in basketball arenas this season.

In June, university leaders from the SEC voted to change the league’s alcohol policy and allow sales if guidelines were followed.