Time to play: Musselman eager to get going with Arkansas

Musselman eager to get going with Arkansas 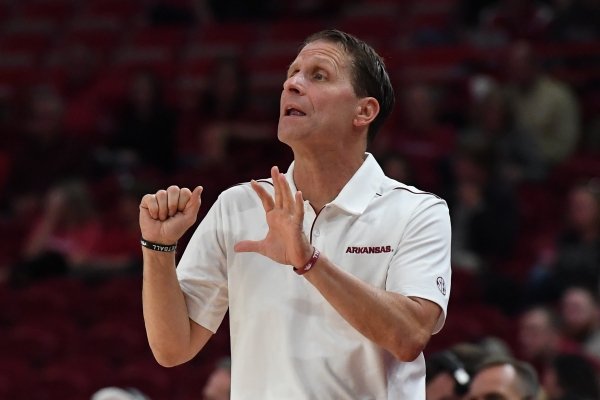 FAYETTEVILLE -- The University of Arkansas basketball team will be led tonight by a new coach against an old foe.

Arkansas opens its 97th season -- and first with Coach Eric Musselman -- when the Razorbacks play Rice at 7 p.m. in Walton Arena.

It will be the 144th meeting of the former Southwest Conference rivals, who first played during the Razorbacks' inaugural 1923-24 season when Arkansas and Rice split two games with each winning on the road.

Musselman, a former NBA head coach, was 110-34 the previous four seasons at Nevada in his first college head coaching job. He led the Wolf Pack to the NCAA Tournament the previous three seasons, including a Sweet 16 appearance in 2018.

Now Musselman has the challenge of making the Razorbacks NCAA Tournament regulars again and advancing as they did under coaches Eddie Sutton and Nolan Richardson.

"I'm really excited," Musselman said. "The fans, the community has been awesome to my daughter, my wife, myself. But I've been around long enough to know the honeymoon ends when we jump ball."

The Razorbacks were picked to finish 11th in the SEC in a preseason media poll.

"Our expectation is just to exceed expectations," senior guard Jimmy Whitt said. "Wherever people want to rank us, wherever we are."

"It gives us a lot of room for improvement. That's how I look at it, which is good. When you have a lot of room for growth, it's cool to see how it will be able to translate for us. I think everybody has that little extra motivation."

Arkansas finished 18-16 last season with a 63-60 loss at Indiana in the second-round of the NIT. During the regular season the Razorbacks were 6-8 in games decided by six or fewer points -- including a 94-88 overtime loss at home to SEC champion LSU, a 70-66 loss at Kentucky and a 67-64 loss at Texas Tech, which lost the NCAA Tournament title game to Virginia.

"We played a lot of close games," said sophomore guard Isaiah Joe, a preseason All-SEC pick. "If we could have pulled a couple more of those out, that might have been the edge to got us to the NCAA Tournament.

"We're real hungry to get there after not making it last year. It hurt, so we don't want to be in that situation again."

The Razorbacks are loaded with guards including Joe, Whitt, Desi Sills, Mason Jones and Jalen Harris, but lack height with the loss of 6-11 Daniel Gafford, a second-round NBA Draft pick by the Chicago Bulls.

"Just worry about the next game on our schedule," Musselman said of expectations this season. "I think that's who we are.

"I think we're going to have different game plans different nights based on our personnel and being a little bit smaller maybe than certain teams. Hopefully, our style of play continues to evolve."

Musselman said he's read all of the preseason projections for the Razorbacks, which don't have them making the NCAA Tournament.

"Not much respect, so we just have to go earn it," he said. "We understand. You just get ready to play, you use it as motivation internally and we'll see where it ends up."

Musselman said in the past he's set goals for his teams during segments of the schedule, such as going 4-1 in the next five games.

"You have to give all the credit to St. Edward's. They are a very well-coached team," Rice Coach Scott Pera said. "They played better and deserved to win.

"We played well in spurts. We looked good at times. But this is what exhibitions are for. Here is what I know about our guys. They are going to take the coaching and the teaching the way they need to take it.

"They'll have a good approach and they'll have the wherewithal to try to get better so that this doesn't happen when they start keeping wins and losses."

"The nucleus of their team is all returning," Musselman said. "They're a scary team because of experience."

Musselman said all coaches probably would like to have more preparation time before opening the season.

"Especially if you're new trying to get your team ready," he said. "But I do think our players are ready to play a game.

"They're ready to get out of this practice mode that we've been in. I think they're tired of hearing me, so we need to start playing games for sure."

Whitt said the Razorbacks are excited to get the Musselman era underway.

"Everybody's ready to get after another team, where it counts, where everything matters going towards the record and actual season," Whitt said. "Each day you get more and more prepared with scouting things, cleaning up things from the two exhibition games we had. We're getting to where we need to be for sure."