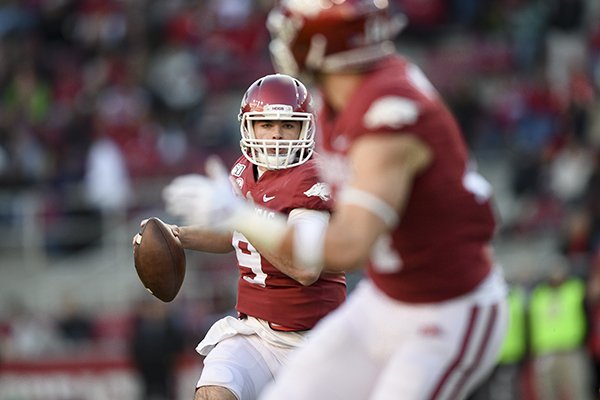 Arkansas quarterback John Stephen Jones looks to throw a pass during a game against Mississippi State on Saturday, Nov. 2, 2019, in Fayetteville.

FAYETTEVILLE -- University of Arkansas freshman John Stephen Jones had his first practice-week interviews of the season Tuesday as he prepares to make his first start at quarterback Saturday against Western Kentucky.

"It feels pretty good," Jones said. "I'm just ready to get to work."

Jones said Coach Chad Morris told him Sunday that he would be getting the call with the first unit.

"He just said, 'Get ready' and he threw me in with the ones on Sunday practice," Jones said. "That's kind of how it went."

[Video not showing up above? Click here to watch » https://www.youtube.com/watch?v=dw0XClqSx1Q]

Jones was frequently cited during training camp by Morris and offensive coordinator Joe Craddock as moving the offense as well as any of the quarterbacks, but the redshirt freshman had to wait until the eighth game to see action. Jones has thrown touchdown passes to Cheyenne O'Grady and Mike Woods the last two games, with no interceptions.

"You just go into every week like there's a chance you're going to play," Jones said. "Because when you get thrown in, you never know when it's going to be and you've just got to be ready."

[Video not showing up above? Click here to watch » https://www.youtube.com/watch?v=ioCQVADgvW0]

"Nah, he didn't say too much, but we kind of figured it would be John Stephen and KJ," he said. "As a team we just rally around those guys ... because they're young. I know there's a lot of pressure when you step in there as a starting quarterback when you really haven't played so we're just trying to rally behind those guys."

Jones said former Arkansas quarterback Ty Storey, now the starter at Western Kentucky, got in touch with him a couple of weeks ago.

"Yeah, he shot me a text after Alabama and told me congratulations on my first career touchdown pass," Jones said. "Me and Ty are really good friends, so it's gonna be fun to see him on Saturday."

[Video not showing up above? Click here to watch » https://www.youtube.com/watch?v=g5Lm1cEcem8]

"It's weird," Harris said. "It's weird just watching Ty on the opposing team and game planning for him. I actually texted him this morning, "Good luck" and I hope he does good. Him being the hometown kid and coming back home, it'll mean a lot to him."

Senior tackle McTelvin Agim was asked what it would be like to finally get a chance to hit Storey.

Agim said he bumped into Storey last winter after he had decided to transfer to Western Kentucky.

[Video not showing up above? Click here to watch » https://www.youtube.com/watch?v=sgXIhOEGbvk]

The Razorbacks worked in shoulder pads and shorts Tuesday with temperatures dipping into the high 40s.

Kickoff returner and wideout De'Vion Warren, who suffered a ankle injury in the loss to Mississippi State on Saturday, was not at practice. He's been ruled out for Saturday's game against Western Kentucky.

Junior tailback Rakeem Boyd was in the green (no contact) jersey that has been his standard wear the past several weeks since bruising a shoulder.

Senior guard Austin Capps was in his standard No. 54 jersey for the second consecutive practice, increasing the likelihood he'll be able to return Saturday after missing two games while in concussion protocol. Kirby Adcock, who missed the Mississippi State game with a concussion, wore a green (no contact) jersey.

[Video not showing up above? Click here to watch » https://www.youtube.com/watch?v=NaOqwtHyJwA]

Cornerback Jarques McClellion, an eight-game starter who came off the bench behind LaDarrius Bishop last week, was back on the first unit with Montaric Brown during the open portion of Tuesday's workout.

"Oh I'll tell you, I'm so proud of him," Jones said. "He got some really good snaps against Alabama, the No. 1 team in the nation, and came back last week and got a touchdown. ... To get to start at quarterback in the SEC, you can have no one on this planet that appreciates that long journey and the ups and downs it takes to get there than old papa. I'm really proud of him and going to be there to watch his first warmup throw."

John Stephen Jones is the son of Stephen Jones, the Cowboys' executive vice President, CEO and director of player personnel, and his wife Karen.

Senior placekicker Connor Limpert is Arkansas' nominee for the Burlsworth Trophy, which is named in honor of former Razorbacks All-American offensive lineman Brandon Burslworth and presented to the nation's top player who began his college career as a walk-on.

Limpert has hit 12 of 15 field-goal attempts and all 24 of his extra-point tries. He is 5 of 7 on field goals of 40 or more yards, including a 54-yarder against Colorado State.

Sophomore placekicker Blake Grupe is Arkansas State University's Burlsworth Trophy nominee. He has hit 13 of 14 field goal attempts, including 4 of 5 from 40 or more yards with a long of 46. His miss was on a 50-yard try. He's also hit 37 of 38 extra point attempts.

Will Hastings, a senior receiver from Little Rock's Pulaski Academy, is Auburn's nominee. He has 12 catches for 174 yards and a touchdown.

Western Kentucky senior nickel back Ta'Corian Darden is also one of the record 83 nominees for the trophy this year.