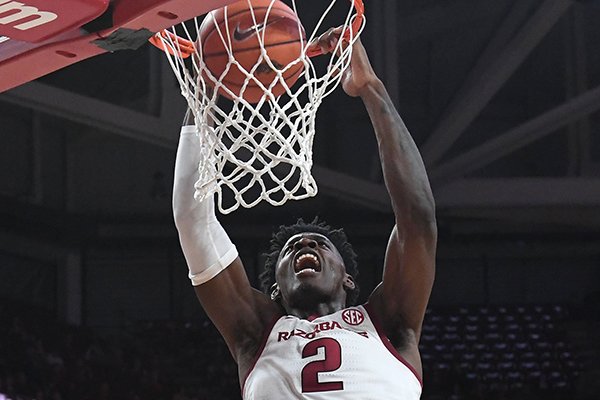 Arkansas forward Adrio Bailey dunks the ball during a game against Rice on Tuesday, Nov. 5, 2019, in Fayetteville.

FAYETTEVILLE -- University of Arkansas men's basketball Coach Eric Musselman got "Artested" by Adrio Bailey in the Razorbacks' 91-43 victory over Rice on Tuesday night.

That's how Musselman refers to a player putting himself into a game.

The Razorbacks were leading the Owls 73-33 with 7:56 left in Musselman's Arkansas debut when Bailey got off the bench and checked in for Ethan Henderson during a media timeout.

"Adrio Bailey -- first time ever since Ron Artest -- actually subbed himself back into a game," Musselman said in his postgame news conference. "I was a little bit shocked.

[Video not showing up above? Click here to watch » https://www.youtube.com/watch?v=cG7lvOw6FOs]

"The guy walked out to the scorer's table without getting the approval from the coaching staff, so I give him credit for taking it upon himself to sub himself in."

The term "Artested" comes from former NBA All-Star forward Ron Artest, who played for Sacramento when Musselman was the Kings coach during the 2006-07 season.

"With Artest, I took him out of the game and he went down and grabbed a Gatorade, drank it and then walked right by me to check himself back in the game," Musselman said. "I said, 'Where are you going?' He said, 'I'm going back in the game.'

Musselman said Thursday that Bailey explained that he thought he had heard his name called to check into the game. Bailey came out at the next dead-ball situation with 6:52 left, and Henderson went back into the game.

"I'll take Adrio at his word that he thought I called for him to go back in," Musselman said. "It's all good."

Other than Bailey inadvertently "Artesting" Musselman, the substitution pattern worked well against Rice.

"We had players asking to come out with the belief that they would go right back in," Musselman said. "Sometimes guys don't want to tell the coaching staff that they need a blow because they're worried about how quickly they're going to get back in."

Musselman said four players asked to come out during different stretches of the game for a quick rest.

"We got them right back in and tried to reward them," he said. "That builds trust and a bond between them and the coaching staff."

Musselman said while coaching at Nevada, he used a small rotation -- especially the last three seasons when he led the Wolf Pack to NCAA Tournament appearances.

"I didn't substitute much at all," he said. "Played six guys predominantly one year. Seven one year, and seven and a half one year."

Musselman said that when he coached in the CBA, then the NBA and later the NBA Developmental League -- known as the G League because it's sponsored by Gatorade -- he used more players than he has in college because of longer schedules (82 games in the NBA, 50 in the G League), longer games (48 minutes) and more travel.

"At the collegiate level, these guys are younger." Musselman said. "You play one to two games a week."

Against Rice, Musselman said staff members helped him keep up with how many minutes each Razorback had played and if someone such as Joe needed a break.

"We did try to distribute the minutes, because I don't know how the flow of the game's going to go," Musselman said. "So you'll see us at times try to get Isaiah a blow for 20 seconds before a media timeout's coming.

"Then that 20 seconds, because of the time, adds a little bit more time for him to get off his legs. When we sub, we do think about things like that for sure when you have a limited roster."

Musselman was asked if Artest and Bailey are the only players he's had put themselves back into a game.

"Those are the only two times I'd talk about," he said laughing. "Gilbert Arenas [a guard for Musselman with the Golden State Warriors] pulled it a few times, too."