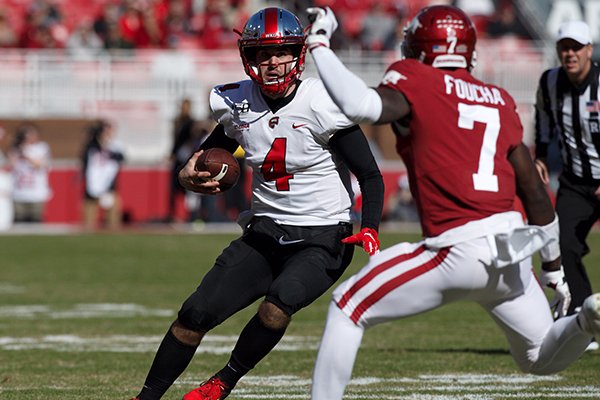 Western Kentucky quarterback Ty Storey (4) runs with the ball as Arkansas defensive back Joe Foucha (7) pursues during a game Saturday, Nov. 9, 2019, in Fayetteville.

Saturday's focus was on who would quarterback the University of Arkansas, but it was a former Razorback who commandeered the field.

Ty Storey, who started for the UA last year before transferring to Western Kentucky, dominated the Hogs in a 45-19 victory at Reynolds Razorback Stadium. Storey, a Charleston native, finished 22-of-32 passing for 213 yards and 1 TD. He also ran 17 times for 77 yards and 2 TDs.

His day overshadowed the Hogs' bright spot, running back Rakeem Boyd. He had 8 carries for 185 yards, including TD runs of 76 and 86 yards. Boyd racked up more than half of the UA's 340 yards.

Redshirt freshman John Stephen Jones started at quarterback for the Razorbacks (2-8) and guided the offense on four possessions before true freshman KJ Jefferson entered for his first drive and took the majority of the snaps thereafter. Both struggled as the Hilltoppers (6-4) smoothly moved up and down the field.

On the game's opening possession, Jones rolled out on third and 5 and threw an interception under pressure at the UA 42.

Twice the defense had a chance to chase the Hilltoppers from the field on fourth down, but both times Western Kentucky converted. First, Storey completed a 5-yard pass to Jahcour Pearson on fourth and 4. Then, Storey scrambled for 5 yards to the UA 19 on fourth and 3.

On the next play, WKU caught the Hogs on a reverse, and Jacquez Sloan ran in from 19 yards out for a 7-0 lead.

The Razorbacks responded with a 4-play, 88-yard drive that was lifted up by Boyd's 76-yard TD run up the middle for a 7-7 tie with 8:02 left in the first quarter.

Storey went back to work, guiding the Hilltoppers on a 12-play, 75-yard drive that devoured 6:03. The Hilltoppers converted on three third downs, but none bigger than when Storey was flushed from the pocket and threw across his body to Joshua Simon for a 22-yard gain to the UA 23 on third and 10. Storey scored on a 9-yard keeper for a 14-7 edge with 1:59 left in the first quarter.

The Hogs went three and out on their next possession, and the punt was fair caught at the WKU 41. Again, the Hogs could not remove WKU from the field, as the Hilltoppers converted two more fourth downs, including a 7-yard pass from Storey to Lucky Jackson on fourth and 6 to the UA 25. Storey's second TD run, this one from 1 yard out, gave the Hilltoppers a 21-7 lead with 7:42 left in the first half.

The Hogs again went three and out, but the Hilltoppers didn't grind out their fourth TD drive. On the second play, Storey hit a wide-open Pearson for a 69-yard TD pass for a 28-7 lead.

Jefferson entered on UA's fifth drive, and ran on his first two snaps for 11 combined yards. After losing 4 yards on a run, Jefferson threw two incomplete passes and the Hogs punted.

The Hilltoppers converted their fifth fourth-down conversion in five first-half tries on a 12-play, 68-yard touchdown drive. Storey found Jackson on a 26-yard pass to the UA 1, and WKU scored on Gaej Walker's 1-yard run as the Hilltoppers took a 35-7 lead into halftime.

On the first drive of the second half, the Hogs' defense recorded its first stop of the day.

Jefferson returned at QB and guided the Razorbacks on what appeared to be a touchdown drive when he connected with Treylon Burks in the end zone from 26 yards out, but a holding called negated the score. On fourth and 16, Jefferson and Burks tried to hook up again, this time unsuccessfully.

The Hogs stopped the Hilltoppers for a second time and took over at their own 14 with 12:39 left in the game. Boyd provided the Razorbacks their second highlight — both courtesy of him. After an incomplete pass, Boyd ran 86 yards for a touchdown. Connor Limpert's extra point was blocked, leaving the Hogs behind 38-13 with 12:21 left.

After another stop, the Hogs took over at their 20. On third and 10, Jefferson's pass deflected off Burks' hands, and Devon Key returned the interception 25 yards for a TD and 45-13 lead.

The Razorbacks scored again on a 70-yard drive. The key plays were a 20-yard completion from Jefferson to Burks, then T.J. Hammonds ran for 29 yards to the WKU 10. On third and goal from the 2, Jefferson ran in for a touchdown. The two-point conversion failed, leaving the score at 45-19.

Template may take a moment to load