Musselman's drills sink in with Hogs 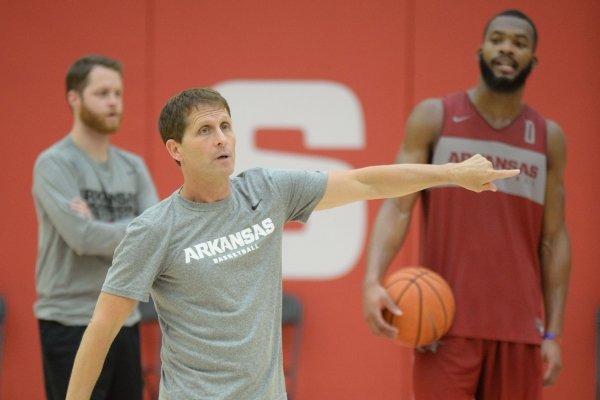 Arkansas coach Eric Musselman directs his players Thursday, Sept. 26, 2019, during practice in the Eddie Sutton Gymnasium inside the Basketball Performance Center in Fayetteville.

FAYETTEVILLE -- University of Arkansas Coach Eric Musselman believes in having variety in his basketball practices.

"As a college player, I remember not wanting to do the same drills day after day after day," said Musselman, who was a guard at the University of San Diego. "So we just try to grab our guys' attention with something a little bit different."

The Razorbacks have passed around a football in practice in a drill where they don't dribble. They also have written messages on the dimples in golf balls, signifying struggles in their lives.

"The golf ball thing will be something we talk about internally with our own group," Musselman said. "We want to try to get to know each other on a more personal level and on a deeper level."

Junior guard Jalen Harris didn't want to say what he wrote on his golf ball because of its personal nature but said he believes it is a good thing for the players to share their stories with each other.

"It's going to help show us why we're playing the game that we love," Harris said. "It's also going to bring us closer where our bond is a lot stronger."

Sophomore guard Desi Sills said the team exercise with the golf balls has helped him open up more.

"It's getting people out of their comfort zone, getting people ready to talk -- especially me," Sills said. "I've never been a big talker, but since Coach Muss came in, I've been talking a little bit more."

Musselman said the plan is to have a bag with the golf balls with the team at all times.

"It might be a road trip when we're at a team meal together and we pull a ball out and somebody gets up and says what's on their golf ball and then explains how they came to that," Musselman said. "Sometimes you get so in the routine of practice, then film.

During some practices the Razorbacks have worn weighted vests for conditioning.

"Running around in those vests gets you tired," Harris said. "That's going to help make us better in late-game situations."

Players have worn work gloves to improve their ball-handing.

"When you bring out the weighted vests and gloves it's sort of a shock, like 'Wow, we're really doing this?' " senior guard Jimmy Whitt said. "But it's funny, because as much as you may not think it'll translate to basketball, it really does.

"I know after we brought out the gloves we had the least amount of turnovers in one of our practices that we'd recently just had.

"So I think it's pretty cool how you can do these sorts of fun things. They're sort of out of the box different, but they really do translate."

Gary Urcheck -- who played point guard at Ashland (Ohio) College for the late Bill Musselman, Eric's father -- recalled that in the 1960s Bill Musselman used drills in which the players had to handle the ball wearing work gloves.

"Eric got the idea for the glove drill from his dad," said Urcheck, who lives in Ohio and is visiting Fayetteville this week. "We used to do a lot of different, interesting things in practice and Eric is continuing that with his team now."

The Razorbacks practiced with gloves for three days.

"You take those gloves off and it becomes easier to catch, dribble and shoot," Musselman said. "Just kind of an overload principle we wanted to use."

Another drill the Razorbacks have done involves players holding a string between them.

"I would hold one end of the string and a teammate would hold the other end," Whitt said. "You want to keep tension in the string so if one person moves too far or too little with the other person you'll mess it up.

Arkansas has held its first two opponents -- Rice and North Texas -- to a combined 30.8% percent shooting from the field (33 of 107) and in beating the Owls 91-43 and Mean Green 66-43, so presumably the string drill had a positive impact.

"We like to say you and your teammate should be on a string on defense," Whitt said. "When one person moves the other person should move."

"Not necessarily on the ball, but our weakside defenders become really important and they have to move on like they're on a string," he said. "There's no better way to illustrate that than to actually use a string."

In another defensive drill designed to keep the players from fouling, they hold a towel over their heads while moving their feet.

"When you have small numbers like we do, you can't be in foul trouble," Whitt said. "Because then you can't play as aggressive as you want to on the defensive end."

Musselman said it's a drill he used at Nevada -- where he coached the previous four seasons -- as well as in the NBA.

"We're not going to play defense with a towel for an hour," he said. "But hopefully if you do it for a couple minutes, it illustrates in their head the importance of it instead of just talking about it or blowing a whistle and saying, 'Hey, you fouled a guy.' It's just another way for us to try to emphasize it."

The Razorbacks also have a drill where they practice with a bubble on the rim to get used to chasing rebounds at different angles.

""Coach Muss comes in and he really knows what he's doing and knows what he's talking about, and we're just buying in," Sills said. "Whatever he says, we really believe in now."

Musselman wrote personal letters to each player before the season started, another idea he got from his father.

"My dad used to write me letters before my high school games, and I saved a lot of them," Musselman said. "They were powerful and they were meaningful. When it's pen to paper, you can pull it out at different times."

Musselman said he believes the players have responded well to the various drills and team-bonding exercises.

"I think the guys have enjoyed it," he said. "It opens their eyes to something new and I think they're willing to embrace it."