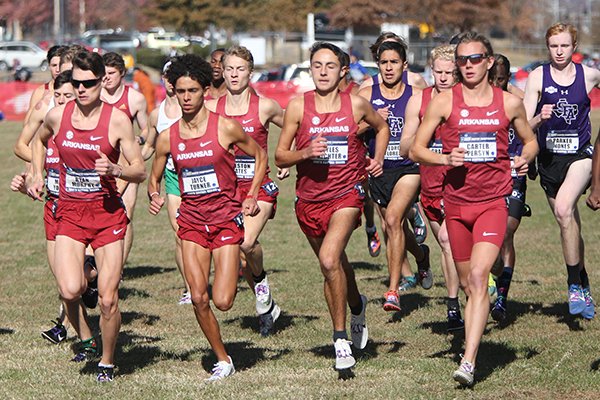 Arkansas runners are shown at the starting line during the NCAA South Regional on Friday, Nov. 15, 2019, at Agri Park in Fayetteville.

FAYETTEVILLE -- The University of Arkansas men's cross country team had a disappointing third-place finish at the SEC Championships behind Ole Miss and Alabama.

"Our pride was hurt a little bit. Our egos were bruised," Arkansas Coach Chris Bucknam said. "We had to run better, and we did."

The Razorbacks bounced back by taking second behind Texas on Friday at the NCAA South Central Regional to automatically advance to the national meet Nov. 23 in Terre Haute, Ind.

"I'm proud of this team and how we competed," Bucknam said. "It's bittersweet, because we want to win and all that, but hey, we're going to Terre Haute next week and see if we can have an even better race."

Arkansas junior Matt Young took third in 29:56.7 as the Razorbacks advanced to the national meet for the eighth consecutive year and 49th time overall.

"We really wanted to keep that tradition going after our not-so-good performance at SECs," Young said. "We were all a little bit off that day. We're thankful to qualify for the national championships."

Arkansas sophomore Ryan Murphy, running his second cross country race this season after recovering from a stress fracture in his heel bone that he suffered last outdoor season, finished 13th in 30:38.6.

"I can't even begin to tell you how many hours Murph's put in the pool rehabbing," Bucknam said. "When we talk about rehabbing and cross-training, there's going to be a picture on the board to do it like Murph.

"I'm so proud of him. His engine is good, he's just got to get his legs underneath him."

"I mean, those two freshmen, that's the first competitive 10K they've ever run," Bucknam said. "That's not a play-around distance for kids that were running 5Ks in high school. So you double the distance in a meet where everybody knew what was at stake, and they stepped up to the plate and did a great job."

Arkansas State University junior Bennett Pascoe finished 21st with the Red Wolves taking sixth with 221 points in the 22-team field. The University of Arkansas at Little Rock was 21st with 604 points.

Arkansas competed without its top runner Gilbert Boit -- last year's SEC champion -- who is redshirting this season with the anticipation it will help the Razorbacks have a stronger team next fall.

"We had to swallow a tough pill with Gilbert being out, and we did that at the beginning of the year, and our guys didn't whimper or whine," Bucknam said. "They said, 'Coach, we understand and we're going to give you our best effort,' and we got to the national meet.

"It's not easy to do. We have better days ahead."

Young said he expects the Razorbacks to be a national contender in 2021.

"Absolutely," he said. "We'll have Gilbert back, and some great recruits and transfers coming in. I really think we'll be able to contend for a national title next year and get that SEC championship pretty easily."

The Razorbacks started Friday's race slower than they did at the SEC meet.

"Because some of our guys faltered at the end of our last race, we wanted to go out a little bit more conservatively, then move up in the pack together," Young said. "That strategy played out pretty well."