Under 50 suits Hogs: Defensive stretch best in past 35 years 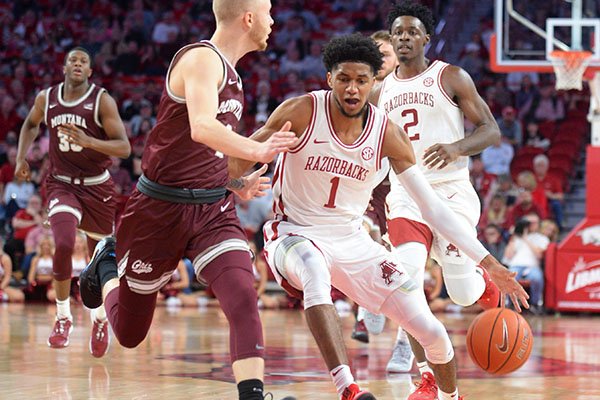 FAYETTEVILLE -- An opponent finally scored more than 43 points against the University of Arkansas basketball team.

But not much more.

The Razorbacks put in another stifling defensive effort to beat Montana 64-46 on Saturday at Walton Arena before an announced crowd of 13,058.

The last time the Razorbacks held three opponents under 50 points during a three-game stretch, according to HogStats.com, was during the 1983-84 season in victories over TCU 55-48, Texas 59-41 and Texas Tech 55-49 before rules were added for a shot clock and three-point shot.

"I just thought our defense was once again really, really good," Arkansas Coach Eric Musselman said. "We did not shoot the ball well at all. We were not pretty offensively.

"But that's what you have to do on nights you can't score. You have to turn up your defensive intensity."

The Razorbacks have held their first three opponents to 31.2% shooting from the field.

"They've really bought in to the game plan defensively," Musselman said. "Hopefully, we can keep buying in on a nightly basis, but I think they really like playing defense.

"I think they've really quickly got a grasp of what we're trying to do defensively. I think contesting shots and understanding the importance of every defensive possession, they've been really, really good so far."

"We take pride in it," Arkansas senior forward Adrio Bailey said of playing defense. "We decided to have fun with it. They always say defense leads to offense, so we play defense first and the offense just comes."

The Razorbacks, who outscored the Grizzles 23-12 in points off of turnovers, had some defensive lapses.

Senior guard Mason Jones -- who led Arkansas with 19 points, 5 rebounds, 4 assists and 4 steals -- took responsibility for allowing Montana guard Kendal Manuel to hit a layup off an inbounds pass to pull the Grizzlies within 28-17 with 2:51 left in the first half.

The play in front of Arkansas' bench drew Musselman's ire.

"He just went ballistic. He went crazy," Jones said with a smile. "I'm not going to say what he said, but just know that he went crazy. He just told me, 'Da-da-da-da-da-da!' "

Jones said he didn't enjoy playing defense prior to this season, but he's undergone an attitude adjustment under Musselman.

"Coach Muss, he pushes us hard and he coaches us hard," Jones said. "He only wants the best out of us, and he knows that we're going to rely on defense this year. So we've got to make sure we're on our P's and Q's."

Bailey, who had 12 points and a career-high 11 rebounds, said the Razorbacks are preparing for opponents with detailed scouting reports -- which Musselman said would be the case when he was hired after leading Nevada to a 110-34 record the previous four seasons.

"Last year, we really didn't do scout," Bailey said. "This year, [Musselman] probably takes scout harder than anything I've ever seen in my basketball career."

Arkansas made defending Montana 6-5 senior guard Sayeed Pridgett, who came into the game averaging 23.5 points, a priority. He finished with 13 points against the Razorbacks while hitting 6 of 13 shots and committing 7 turnovers.

During practice last week, Musselman said 6-8 Reggie Chaney -- who has been indefinitely suspended from games -- played Pridgett on the scout team in practice.

"We had a siren go off in all our preparations any time [Chaney playing Sayeed] touched the ball," Musselman said. "Just to make sure we didn't let a guy who came in here as one of the leading scorers get clean looks."

Musselman credited senior guard Jimmy Whitt -- who had 14 points and seven rebounds -- Jones and sophomore guard Isaiah Joe with being the primary defenders on Pridgett.

"It was very effective," Jones said of the defensive strategy against Pridgett. "Coach Musselman always told us in practice that if he gets the ball, shrink [the floor] and everybody move closer to him and make him give up the ball.

"I think we did pretty good. As long as we continue to listen to Coach Musselman and get ready for the game plan, then we should be good."

Jones said he had no problem with Musselman screaming at him for his defensive mistakes during the game because Musselman does the same thing in practice.

KEY STAT The Razorbacks outscored the Grizzlies 23-12 on points off turnovers.

UP NEXT Arkansas plays Texas Southern at 7 p.m. Tuesday at Walton Arena in Fayetteville.