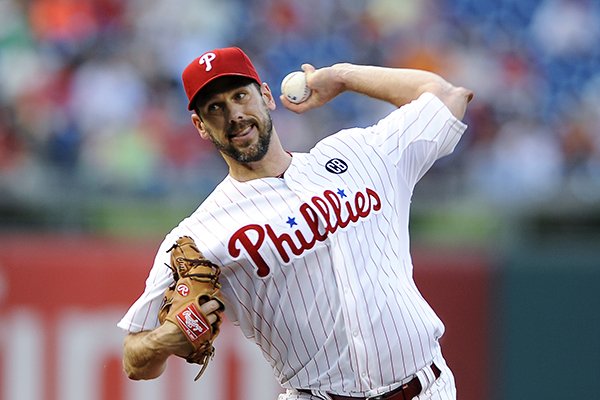 Philadelphia Phillies starting pitcher Cliff Lee throws a pitch during the first inning of a baseball game against the San Francisco Giants on Monday, July 21, 2014, in Philadelphia. (AP Photo/Michael Perez)

FAYETTEVILLE — Former Arkansas pitcher Cliff Lee is on the 2020 ballot for the National Baseball Hall of Fame.

Lee won the American League Cy Young Award and was also the AL’s comeback player of the year in 2008 while pitching for the Indians. Lee finished the year with AL bests in wins (22) and ERA (2.54) that season, one year after a preseason injury caused him to struggle and be sent to the minor leagues for a short time.

In 11 postseason starts, Lee had a 7-3 record and 2.52 ERA. He pitched three complete games in the postseason.

According to BaseballReference.com, Lee’s 43.5 win above replacement is fourth among players eligible for the Hall for the first time, behind Derek Jeter, Bobby Abreu and Jason Giambi. Lee finished in the top four of the Cy Young Award voting three times and twice received votes for MVP.

There are 32 candidates on this year’s Hall of Fame ballot, including 14 repeat candidates. Curt Schilling was the highest vote getter last year (60.9 percent) among returning candidates, followed by Roger Clemens (59.5) and Barry Bonds (59.1).

It is rare for former players to be elected in their first year to appear on the ballot. Elected players must receive votes on 75 percent of submitted ballots, which last year totaled 425.

Lee, who grew up in Benton and played two years of junior college baseball at Meridian (Miss.) Community College, transferred to Arkansas prior to his junior season in 2000. He was inconsistent in his only season with the Razorbacks and recorded a 4-3 record and 4.45 ERA in 65 innings.

No former Arkansas baseball player has been elected to the Hall of Fame.