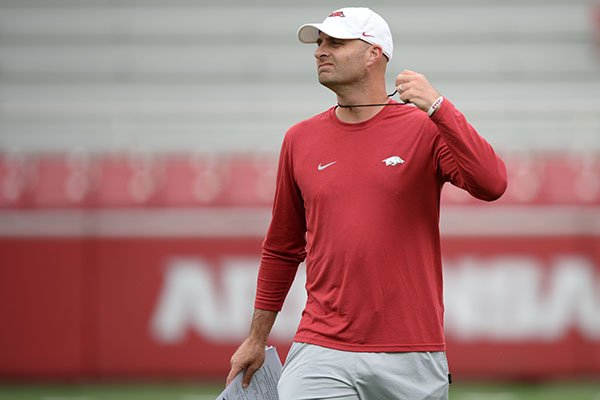 FAYETTEVILLE -- University of Arkansas interim Coach Barry Lunney Jr. said he watched No. 1 LSU's 58-37 road victory at Ole Miss on Saturday night as the Razorbacks had an open date and he was not on the road recruiting.

Lunney liberally sprinkled the word "great" into his commentary on the Tigers.

"They're very good," he said. "They're great obviously with what they do offensively. Defensively, they are very gifted.

"They're just super well-coached on both sides of the ball and special teams as well. So all three phases. You throw in a great talent and great schemes and great coaching, you've got a team playing really confident.

"Everybody sees it. Anybody that follows college football sees it and recognizes it. And they are certainly playing at a very high level."

Lunney mentioned how rare it is to watch a game on TV as opposed to the coach's film.

"I watched the whole thing," he said. "I don't watch too many TV games, you know. Obviously, we don't have many opportunities to do that besides open dates. Usually when I am, I'm chasing my kids around playing basketball or hanging out with them. It worked out to where I could turn that on and watch it."

The Razorbacks listed three potential starting quarterbacks in their games notes, with freshman KJ Jefferson, redshirt freshman John Stephen Jones and junior Nick Starkel linked by "or" in that order.

"That die is already cast, I think, with the way we're heading," Lunney said of the plan at quarterback. "At this point, do we think holding our announcement of a starting quarterback is going to be a significant advantage over our opponent? No, it's not.

Interim Coach Barry Lunney Jr. said Monday he had made the decision to keep players off limits for media interviews this week.

Athletic Director Hunter Yurachek and Lunney have been the only men involved with the football program to address the media since coach Chad Morris was fired Nov. 10, the day after a 45-19 loss to Western Kentucky dropped the Razorbacks to 2-8.

"This has been a lot for them to handle and digest," Lunney said. "I think unity is really important here, and I have no concerns that any of our players would get up here and say anything that didn't reflect that. But just for the time and situation we're in, I made a decision that I'm going to be the voice right now. That's just what we're going to do. I know you guys won't agree with that, but that's what we're going to do, and I hope you guys can respect that."

This is believed to be the first Arkansas game week without player access for the media since Bobby Petrino suspended interviews after the death of tight end Garrett Uekman on Nov. 20, 2011, also before a game at No. 1 LSU.

Linebacker Bumper Pool is expected to be healthy enough to make his 11th start of the season for Arkansas on Saturday at LSU. Pool did not practice on Tuesday or Wednesday last week with a "regular" muscle injury, interim Coach Barry Lunney Jr. said. Pool had a yellow (no participation) jersey on last Tuesday and was not seen during the open portion of practice last Wednesday.

Lunney said Monday that Pool and guard Kirby Adcock, who has missed the past two games while in concussion protocol, were on track to return Saturday. He did not address wide receiver De'Vion Warren's ankle injury nor speak specifically on any injured player.

"I think we're trending in the right direction in that regard," Lunney said when asked about Adcock and Pool. "Refreshed, re-energized, we'll have two hard days of practice this week. I do anticipate several of those guys being back. If I could sit here and tell you for sure are they going to be game ready, all those guys that you mentioned and some that you haven't, I don't know that. But, I think we are all trending in the right direction."

For LSU, safety Grant Delpit is playing on an injured ankle.

"It's tough when he doesn't practice all week," LSU Coach Ed Orgeron said. "Obviously that ankle is very sore and not getting reps hurts sometimes. Making tackles in open space hurts sometimes because he can't bend or run like he wants to. ... Hopefully he can get healthy for this weekend."

LSU Coach Ed Orgeron was asked at his Monday news conference that, given the injury to Alabama quarterback Tua Tagovailoa with the Crimson Tide well in command late in the first half last week at Mississippi State, would he keep an eye on getting key players out against Arkansas if the 44-point favorite Tigers take a commanding lead.

"That doesn't mean I'm going to take Tua out. It's hard to take guys out before the first half. Teams can come back, especially in the SEC, you know what I'm saying?"

Ed Orgeron, a two-time interim coach at USC and LSU, was asked how much of a lift he can expect Barry Lunney Jr. to give the Razorbacks in his first game at the helm Saturday.

"I think they get juice," Orgeron said. "Every time I've been an interim coach, the next week we came out on fire. But you try to change things up, you try to flip the script, get your coaches home early. I fed them cookies. I think they ate 500 cookies the first day. Everybody was happy."