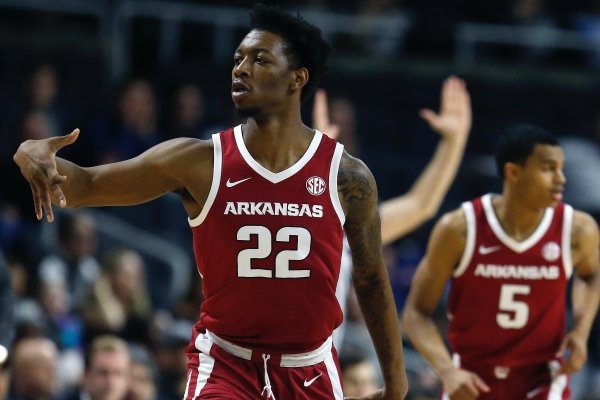 Arkansas' Gabe Osabuohien (22) reacts after making a three-pointer during the first half of a first round NCAA National Invitation Tournament college basketball game against Providence in Providence, R.I., Tuesday, March 19, 2019. (AP Photo/Michael Dwyer)

The Mountaineers said in a release that the NCAA approved the junior’s waiver request for immediately eligibility on Wednesday.

Osabuohien (Oh-sah-BOY-en) transferred to West Virginia from Arkansas in August, when he was dismissed by Razorbacks coach Eric Musselman without disclosing a reason.

The 6-foot-8 Osabuohien played in 54 games with eight starts in two seasons with Arkansas. He averaged 2.4 points and 2.5 rebounds per game over his career.

West Virginia coach Bob Huggins says Osabuohien gives the Mountaineers “another much-needed big man who can defend on the perimeter as well as play on the offensive end.”