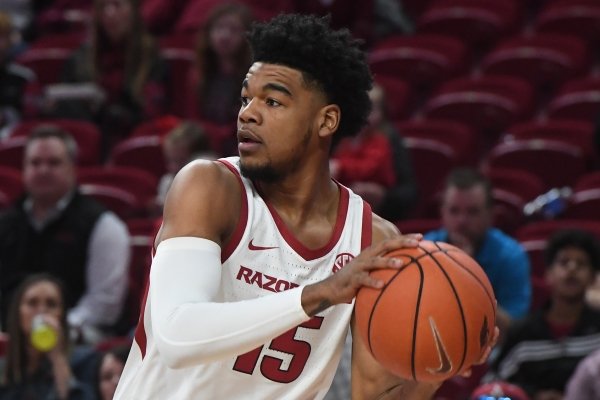 His confidence level, he said following a win over Montana three days earlier, was as high as it has ever been in his career. Against the Tigers, though, Jones scored just six points and barely played more than half of the available minutes.

Asked what went into the decision to play Jones only 21 minutes - tied for his fewest in a game at Arkansas - and six minutes in the second half, Arkansas coach Eric Musselman supplied a simple answer.

"Focus," he said Thursday. "I felt like he needed to be a little bit more focused on both ends of the floor. Defensive assignment stuff. Also, the team is playing well, so when you’re playing well sometimes you roll with those guys.

"Well, not sometimes. I’m always going to roll with whoever’s playing well and whoever is playing with a ton of energy and a lot of enthusiasm."

Shortly after adding his second score of the night, Jones put together a rough sequence on both ends of the floor. First, he shuffled his feet as he attempted to drive baseline after catching a pass in the left corner from Desi Sills, then came a sloppy turnover as he dribbled through four Texas Southern defenders. The miscue led to a transition score by Tigers guard Tyrik Armstrong.

On the Razorbacks' ensuing offensive possession, Jones let fly a 3-pointer from the left corner that grazed the top-left corner of the backboard. Then, five seconds later, Jones committed a foul on the defensive end.

The junior recorded only a foul in his six second-half minutes, and he was not re-inserted in the lineup for the remainder of the game.

All indications are that Jones' response has been positive since the benching. He and Musselman talked about the situation after Wednesday's practice, the coach noted.

"Now that he’s four games into his junior year, we need leadership from him, not just to be a good player," Musselman said. "Obviously, he is a good player. We all know that. I think the next step in his progress is to become a leader. That’s part of our job as coaches."

"There are a lot of people that say, ‘This guy is a natural-born leader,’ and all that. Well, yes, some guys are," Musselman said. "I think that’s true, but then there are other guys that with nurturing and talking to them, you’ve got to explain what the true meaning of leadership is.