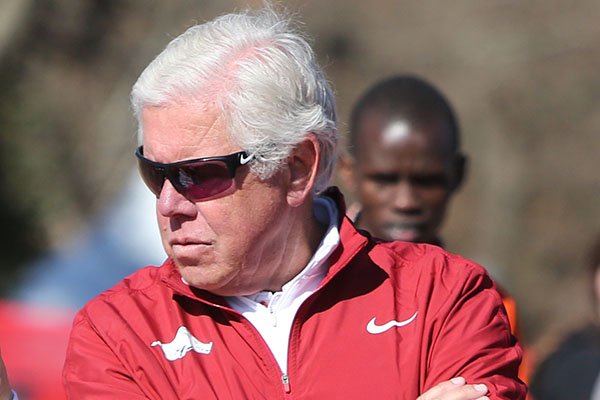 FAYETTEVILLE -- The University of Arkansas women's cross country team has won all six of its meets this year, including dominating performances at the SEC Championships and NCAA South Central Regional.

The Razorbacks scored 21 points to win the SEC title, with Ole Miss second with 93. They were even better at the regional with a perfect score of 15 by taking the top five places, with Texas second with 63.

Now the Razorbacks hope to live up to their No. 1 ranking at the NCAA Championships, which will be run today at Indiana State's Vern Gibson Course in Terre Haute, Ind.

"I think our kids are excited about the opportunity," Arkansas Coach Lance Harter said. "We've had a great season.

"I'm going to remind them, 'Look at the journey we've gone through. It's been incredibly rewarding, and now let's go to the national meet and do what we've been doing. Let's cash in from all the hard work you've already done.' "

The Razorbacks are led by seniors Taylor Werner, Katie Izzo, Devin Clark and Carina Viljoen, who consistently have finished in the top 10 individually in all of their races. Arkansas also has a strong group running for the fifth scoring spot with seniors Maddy Reed and Abby Gray, and junior Lauren Gregory.

"Honestly, this is just the most consistent I think our team has been in a very long time," Clark said. "We've been consistently very good. As long as we just do everything we've been doing, I'm very confident we can win this thing."

The one crown Arkansas hasn't won nationally is in cross country, but the Razorbacks have been close. Four times they have finished second -- to Villanova three consecutive years from 1991-93, and BYU in 1999. The Razorbacks took third in 1994 behind Villanova and Michigan, and were fifth in 2014 and sixth in 1990 and 1998.

"We've collected a few silver trophies and a bronze trophy," Harter said. "It's always an honor to get on the podium. It's just what color trophy do you get? Obviously, gold has eluded us."

"It would be fantastic," Harter said of adding a Division I cross country championship. "To be able to win a national title is a cherished moment in anybody's life.

"What I'd really like to see is [winning it] for the kids. See it in their eyes, just like we did in track last year. To see them so elated and excited."

Arkansas swept NCAA indoor and outdoor track and field titles last year, so winning today would be a third consecutive national championship for the program.

"If it happens, we're going to go crazy, I'm sure," Werner said. "But you can't predict that. I can only do what I can do, and the same thing with my teammates.

"I hope it comes together [today]. But if not, the world will keep turning. I will say it would be pretty cool if we do it."

"He cares so much about each one of us individually," she said. "I feel like we owe it to him to finally get that national title in cross country. It would be cool to be a part of it."

Arkansas' main competition for the title figures to come from No. 2 Stanford, No. 3 BYU, No. 4 Washington and No. 5 Michigan State.

"It's just a ranking, and at the end of the day it doesn't matter," Werner said of Arkansas being No. 1. "We've seen No. 1 teams who didn't even get in the top 10. You never know who's going to come out of the darkness and do extremely well that's not expected to."

Arkansas already has won in Terre Haute this season when it finished first at the John Nichols Invitational on Sept. 21. The Razorbacks also beat Stanford 67 points to 98 at the Nuttycombe Invitational in Madison, Wis., on Oct. 18.

"We know who we can run with, and I think that's gong to help us for the team title chances," Werner said. "It's nice being able to go out with that front pack. It gives you so much confidence when you get out there and look around and see your teammates there."