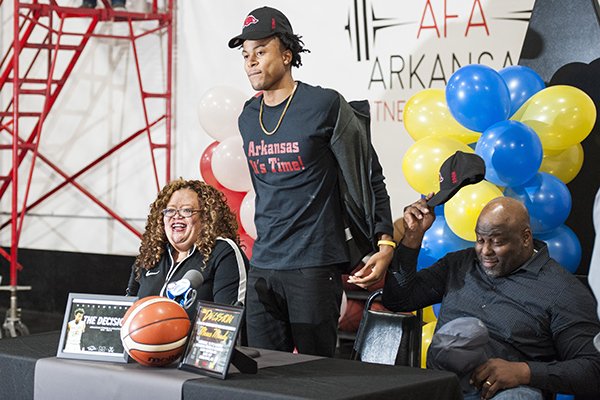 Moses Moody (center) reveals his commitment at Arkansas Fitness and Athletics in Little Rock on Saturday, Nov. 9, 2019, in Little Rock.

The University of Arkansas basketball recruiting class is ranked No. 6 nationally by ESPN after receiving the commitment of forward Jaylin Williams on Saturday.

It could crack the top five soon.

He joins shooting guard Moses Moody, 6-6, 190, of Montverde Academy in Florida as pledges with plans to sign with the Hogs during the spring signing period. Moody played at North Little Rock as a sophomore before transferring to Montverde as a junior.

Paul Biancardi, the national recruiting director for ESPN, rates Williams a four-star recruit, the No. 12 center and No. 87 overall prospect in the Class of 2020.

"I think he's an inside post player, not great skill, but I think ambitious rebounder and I think he can run the floor pretty well," Biancardi said. "They're going to have to work with him on his skill level to score inside."

He's been impressed with Coach Eric Musselman and his staff's ability to land the three in-state products.

"Muss made a commitment to recruiting in-state kids, and he's gotten them," Biancardi said. "This is his first full recruiting class, and when you can get your first full class to be in-state kids who are talented, that can launch a program."

After being hired in April, Musselman and his staff were aggressive in recruiting for the 2020 class.

"You really have to bust it and come up strong, and they came up really strong," Biancardi said.

ESPN rates Davis a four-star recruit and the No. 80 overall prospect.

"I think he's the point guard for them in the future," Biancardi said. "He's got good length, and he's a guy that scores more off the dribble, but I think he's pretty clever with the ball. He's kind of a self-motivated player. You don't have to do much to get him to play hard."

Biancardi rates Moody a four-star recruit, the No. 9 shooting guard and No. 30 overall prospect. He accumulated scholarship offers from Michigan, Southern California, Ohio State, Oregon, Florida, Kansas and numerous others before choosing the Hogs.

"His reputation is that of a shooter, and he can shoot the ball," Biancardi said. "He's got to blossom outside the comfort zone of just being a shooter. Shooting the ball is his greatest asset.

"He's a smooth athlete, but he's not overly dynamic. He's going to put points on the board, and he's going to be an outside threat. Once he continues to improve his putting the ball on the deck game, I think he gives Arkansas points."

Moody, who has a 7-foot-plus wingspan, should have an easier transition to college because his two years at Montverde Academy.

"I don't think his adjustment will be as difficult as some of the others because of the prep he's gotten at that high level," Biancardi said.

Biancardi expects the three future Razorbacks to improve their skill level in Fayetteville.

"All these guys are four-year players," Biancardi said. "I think they'll all develop because Eric is very big on individual development, and I think he'll increase what they already do well, and he'll obviously change their bodies and then enhance their skill level and their basketball IQ.

"When this group starts to grow together as sophomores and juniors, I think you'll see the fruits of the labor."

Arkansas could add a fourth ESPN top 100 prospect on Thanksgiving when Khalen Robinson, 6-1, 170, of Oak Hill Academy in Virginia announces his decision between the Hogs and Kansas.

Biancardi rates Robinson a four-star prospect, the No. 20 point guard and No. 90 recruit.

"He can score the ball," Biancardi said. "In my mind, he's more of a combo guard than anything, and I think he enhances the class depth wise and in athleticism and scoring. He is long and is strong and he has good speed, and I think he can be a guy that could be a very good on-the-ball defender."

ESPN has Kentucky with the nation's top recruiting class followed by Duke, North Carolina, Tennessee and Oklahoma State. A commitment from Robinson could give Arkansas' class a bump.

"That will boost their numerical valve," Biancardi said. "Will it go higher than what it is, I'm not sure yet because I don't have all the numbers in front of me."