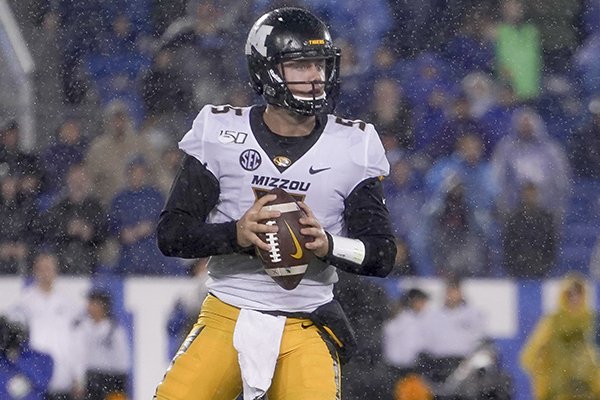 University of Arkansas center Ty Clary usually doesn't text defensive linemen he's about to face, but he made an exception for Missouri tackle Akial Byers.

Clary and Byers, both juniors, were teammates at Fayetteville High School.

"On Sunday we have a board in our O-line room with pictures of the whole defense," Clary said. "I took a video of Akial and texted him. I was like, 'Oh, you're bald. Your hairline is receding.'

"I was just poking fun. He replied, 'Aw, you don't need to do me like that.' We talked a little bit about playing each other."

Clary and Byers are among five former Fayetteville players who will be on opposite sidelines for today's Arkansas-Missouri game in War Memorial Stadium.

Banister went to Missouri as a walk-on, but is now on scholarship.

"We were recruiting Taylor Powell and [Banister] was the receiver he was always throwing to," Tigers Coach Barry Odom said. "He's a guy that ran great routes. He had good quickness.

"He's not going to be the fastest guy in the room, but he understands that and he's learned to run efficient routes."

Banister had a career-high five catches last week against Tennessee for 46 yards. On the season he has 21 receptions for 186 yards and 1 touchdown.

Odom said Banister is also a good blocker and has gained the confidence of Missouri starting quarterback Kelly Bryant and as well as Powell, who started at Georgia when Bryant was injured.

"The quarterback knows exactly where Barrett's going to be," Odom said. "So that's a comfort zone for those guys when Barrett's in the game.

"He's continuing to get better. He's a leader. He's earned everything that he's got, and I'm proud of him."

Banister will go against the team that his grandfather, Harold Horton, and uncle, Tim Horton, both played for, but Arkansas didn't recruit under Coach Bret Bielema.

"I've said it a lot that everybody uses motivation differently and uses different things to drive them," Odom said. "I would imagine playing your home state school, that probably means something to [Banister]."

"Very aware of all three of those guys and the type of football players they are," Lunney said. "They've all made significant contributions there at Missouri.

"Obviously, I think that's a little bit unique. A little bit strange. They grew up under the nose here of our program, obviously have some pretty strong connections to our program.

"Unfortunately, it didn't work out to get them here, and I think they made the best of the opportunity that was laid out before them and have taken advantage of their experience there and have done some good things.

"All three good kids, got to know their families and obviously always rooting for them, except for this game."

"Taylor's a fun guy," Clary said. "He's himself, that's for sure. He's not trying to be anybody else or act cool. He's just a really genuine guy."

Byers, who scored a touchdown on a fumble return in Missouri's 38-0 victory over Arkansas last season, has 16 tackles this season, including a sack. He also one forced fumble and one fumble recovery.

"Akial's always been a really good player," Clary said. "I got to go against him a lot in high school [in practice] and it's going on in college. It's a fun relationship."

"Barrett's been awesome. He was awesome in high school," Clary said. "Barrett knew that [he could play] and he went out and proved it to the Mizzou staff."

Clary plans to seek out his former Fayetteville teammates after today's game.

"We were a really close team in high school," he said. "I love those guys."